Is the data center container the missing link in the effort to bring high-speed Internet access to underserved communities? Hunter Newby of Allied Fiber believes it can be - if a container is hooked to a major dark fiber route. 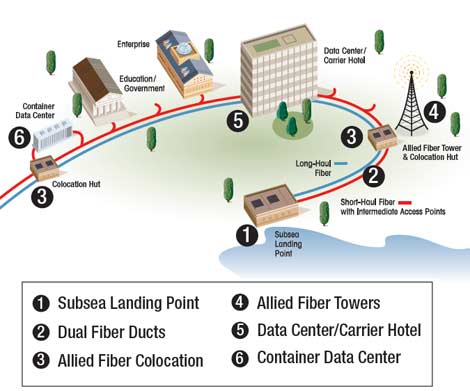 A diagram of the Allied Fiber approach to connect its dark fiber route to various properties, including data center containers (click for larger image).

Is the data center container the missing link in the effort to bring high-speed Internet access to underserved communities? Hunter Newby believes it can be - if a container is  hooked to a major dark fiber route.

Newby, the CEO of Allied Fiber, just happens to have such a dark fiber route. He believes that containers will play a key role in delivering the ubiquitous broadband required to power apps and services on mobile devices like the iPad.

Fiber to the Heartland
Allied Fiber has built a dark fiber network running from northern Virginia to New York to Chicago. The route will be lined with 19 colocation sites and more than 300 wireless towers along the way, extending the rich connectivity of big-city network hubs to second-tier markets in the heartland.

But Newby, an industry veteran who helped build the Telx Group's interconnection business at the 60 Hudson Street carrier hotel in Manhattan, sees facilities as the missing piece of the puzzle. Major data center developers have steered clear of many smaller cities, including those along Allied Fiber's route - cities like Altoona and Harrisburg in Pennsylvania, Edinburgh, Ohio and South Bend Indiana.

"There are no Digital Realty or T5 data centers in these markets," he said. "But there is a need. Will these companies go into these markets? It's not likely.

"The container fits in perfectly into the demand I'm seeing," said Newby. "This is really what unlocks the geography. Now you can sell someone a bite-sized infrastructure that will work for their needs."

Online Community as Organizing Tool
How does this market come together? Newby and Allied Fiber have created the Dark Fiber Community, an information portal at online telecom hub TMCnet. The community is designed to bring together vendors from different parts of the fiber ecosystem.

The site features a number of container infrastructure providers, including Lee Technologies (with its Flexible Solutions modular offering), Universal Networking Services (the US reseller for Australia's Datapod) and Dialectic Networks, an integrator working primarily with IBM's container solutions.

But the Dark Fiber Community container area also features a well-known name that's been quieter about its container ambitions: networking giant Cisco Systems, which has helped provision containers for customers like NASA, and has also marketed its own container for federal customers (see PDF brochure).

"I've met with and spoken to everyone in the container business," said Newby. "What I've seen is an evolution that's accelerating. The container is getting integrated into the mainstream in a very serious way. It's not just the Microsoft data centers in Chicago and Virginia. It's taking the show on the road."

The Geography Problem
Portability and mobility have always been viewed as common use cases for containers. But Newby is urging the leading players to think differently about this market.

"Almost across the board, the container folks have missed the fiber piece of this," he said. "The server vendors are going to realize that you can't just drop the container at a customer site. They can't solve the remaining problem on their own. They need to be able to move the container to where the power is, and will also need access to fiber. What is a data center without access to fiber? It's a warehouse.

"Our problem is still geography. I see all of it converging at the data center and the container. This is really what unlocks the geography. The power of 60 Hudson Street would be moved to the middle of the country."