How Brocade Earned $2 Million in Rebates

Brocade made energy efficiency a top priority in the design of its new data center and corporate campus, which paid off in $2.2 million in rebates from utility PG&amp;E and an estimated $1.5 million in annual operational savings. 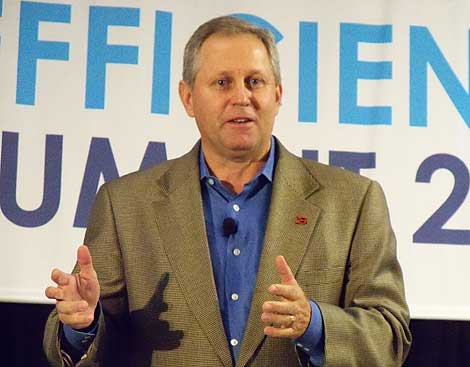 "We were making decisions about where to put projects based on where we had parking space," said Klayko. That's because the company's data centers were effectively out of power capacity, and additional workloads required portable power infrastructure - and the space to house it.

That power squeeze led Brocade to build a state-of-the-art data center as part of its new corporate campus in San Jose, Calif. The company made energy efficiency a top priority in the design and construction of its new campus, and the data center was a key focal point for that effort, which paid off in $2.2 million in rebates from utility PG&E and an estimated $1.5 million in annual operational savings.

When the project was begun, Brocade had 80,000 square feet of space spread across three data centers and five development labs. Those facilities were consolidated into the new data center, which houses 1,920 racks of equipment for Brocade's development labs and 110 racks that support the company's IT operations. Approximately 70 percent of the workloads in the new facility are now virtualized.

The Brocade data center began with a commitment to high-efficency hardware, including chillers, cooling towers and variable frequency drives (VFDs) throughout the system to allow fine-tuned control of airflow and cooling.

Brocade has energy monitoring at the PDU level and in its Starline Busways (overhead power distribution systems allowing easy expansion of rack systems). There are also 1,500 temperature sensors in the Brocade data center tied into building management system, which can auto-adjust cooling as workloads shift.

This video provides a closer look at the new Brocade data center. It runs about 2 minutes.