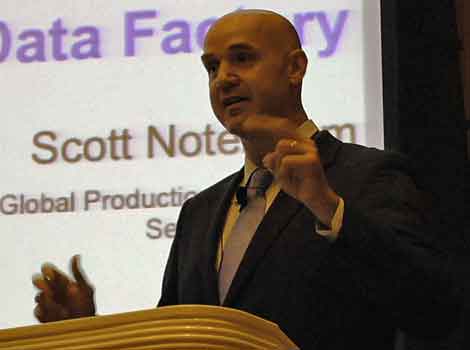 In its ongoing effort to make its data centers more efficient, Yahoo has eliminated the use of humidifiers and chillers in its facilities. What's next? Fan energy, according to Scott Noteboom, Yahoo's director of global data center operations, who said the company is busy developing custom racks and server trays.

In a presentation Monday at the AFCOM Data Center World Fall 2010 conference in Las Vegas, Noteboom reviewed the evolution of Yahoo's data center designs, which have targeted multiple barriers to energy efficiency in a series of systematic improvements to each new facility. The newest Yahoo data center, the Yahoo Computing Coop opened last week in upstate New York, is cooled almost entirely by fresh air, resulting in exceptional energy efficiency.

Targeting Server-Level Fan Activity
But Noteboom still sees room for improvement. After overhauling the design for its data centers using pre-fab structures, Noteboom says Yahoo is now focusing on the design of its racks and server trays. The goal? Reduce the amount of energy used by server-level fans, which kick on when the temperature rises within the rack.

Raising the temperature in the data center can save big money on power costs. But studies have found that if you nudge the thermostat too high, the energy savings can evaporate in a flurry of fan activity. Yahoo currently operates its data centers with a target server intake temperature of 75 degrees F. When the temperature rises to 78 or 80 degrees, fan activity increases, Noteboom said.

Most server vendors will warranty their equipment to operate at temperatures much higher than 80 degrees, Noteboom said. So how can data center operators gain more granular control over server fans?

"We're looking at taking control of the form factor, the tray or blade," said Noteboom. That effort involves working with vendors to design server trays and racks that move fans to the back of the rack or cabinet, and provide sleeker trays to improve airflow through the equipment. He said that it's been difficult to get server manufacturers to think beyond proprietary designs.

At least one server vendor has developed racks that embrace this concept. In 2008 SGI (then known as Rackable) introduced CloudRack, which featured server trays with no covers and no fans, using larger fans in the rear door of the rack to cool the equipment. See our video demo of CloudRack for more.