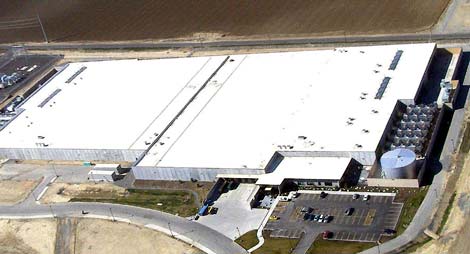 Economic development officials love clusters of huge Internet data centers. But environmental officials are less enthused about large clusters of diesel generators. The town of Quincy, Washington has both, serving as home to major data centers for Microsoft, Yahoo and Intuit (with another project from Sabey Corp. on the way).

Each of the data centers in Quincy uses banks of generators to provide backup power in the event of a utility outage. Diesel engine exhaust is a regulated pollutant, and can be toxic in high concentrations, so state regulators routinely review permits for generators.

Using 48 Megawatts Now
Earlier this year Microsoft began construction on a second data center at its Quincy campus, and applied for permits for an addition 13 diesel generators. That's in addition to the 24 generators currently on site to support Microsoft's first data center, which uses 48 megawatts of power. The expansion would mean a total of 37 diesel generators, all of them 2.5 megawatt units.

The Washington State Department of Ecology has approved Microsoft's additional permit, but has also scheduled a public hearing in Quincy on Sept. 28 to hear from residents on the topic. The Ecology department conducted an evaluation of the health risks from diesel engine exhaust particulates, and found that the Microsoft expansion, viewed in isolation, is not likely to impact public health.

State officials and Microsoft are required to appear at a public meeting to present and discuss the generator expansion. The Department of Ecology took the opportunity to seek feedback from area residents, citing the growing concentration of data centers.

"Due to the interest expressed by other data companies to expand or build in the Quincy area, Ecology was concerned that the cumulative effect of diesel engine emissions should be assessed," the state said in announcing the meeting.

46 Generators in Quincy
Yahoo runs 13 generators at its data center in Quincy, while Intuit has an additional nine gensets, according to an analysis prepared by Gary Palcisko of the Department of Ecology.

"Under most conditions, data center air emissions are minimal," the report notes, but adds that a "system-wide power failure could result in the simultaneous operation of dozens of large diesel engines."

While the impact of generators has been minimal thus far, the economic impact of the Microsoft, Yahoo and Intuit projects has been considerable.

Local officials estimate that Grant and Douglas counties have collected $56.4 million in additional sales tax revenue from data center projects between 2006 and 2008. Grant County's average wage increased 19 percent between 2006 and 2008, while property tax values in the city of Quincy increased by $504 million during that period, according to the Port of Quincy.