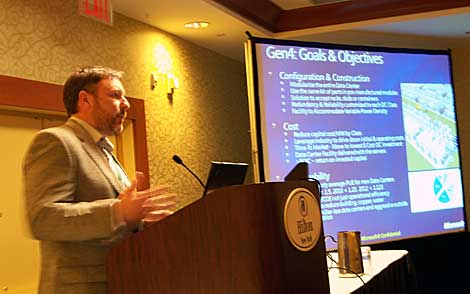 Daniel Costello discusses the use of PACs (pre-assembled components) in Microsoft data centers at The Uptime Symposium in May.

Google has confirmed that Daniel Costello, who has been a key member of data center design teams at Microsoft and Intel, has joined the company's data center staff. "We're excited to welcome Dan to our infrastructure team," said a Google spokesperson. "He has a great track record working with Microsoft and Intel, and we're happy to have him on board."

For the past three years Costello has been working as director of Data Center Services for Microsoft Global Foundation Services. he has been a key player in the development of Microsoft's use of shipping containers and modular design in its most recent data center projects.

A key focus of Costello's work at Microsoft was the use of pre-assembled components (PACs) that could be built in factories and then assembled at the site of a data center. "For us, it’s about pre-manufactured modularization," said Costello.

Does Costello's departure from Microsoft (first noted by Dave Ohara) tell us anything about what's ahead for data center design at Google? Or is Google simply the next frontier for a man with Costello's design experience? Time will tell.