<img src="/sites/datacenterknowledge.com/files/wp-content/uploads/2010/08/ibm-watson.jpg" width="470" height="326" /> IBM's supercomputer "Watson" will compete on the game show "Jeopardy!" in the latest contest pitting man vs. machine. Here's a look at the challenges and research benefits of adapting an advanced computer to understand and answer questions in natural language. 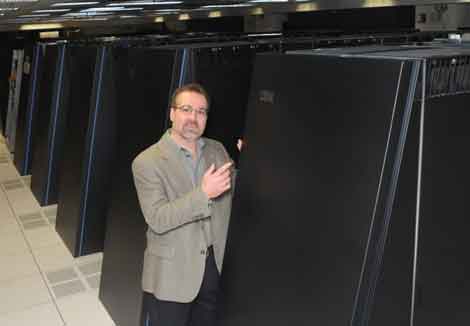 "What is a supercomputer, Alex?"

In the television game show Jeopardy! - where the answers are phrased as questions - contestants are usually the flesh-and-blood kind. This fall, the show will give a silicon-and-metal challenger a chance to compete against humans.

The computer scientists at IBM Blue Gene Research project, which is dedicated to pushing the boundaries in supercomputing, will probably hold their collective breath as a computing system of their design competes on the game show, test-driving several years of intensive work on national television.

The scientists believe the computing system DeepQA, nicknamed “Watson” after the IBM founder Thomas J. Watson, will be able to understand complex questions and answer with enough precision and speed to compete effectively. Internet users can match their wits against the machine in the Watson Trivia Challenge.

Leveraging Advances For Business and Society
“The essence of making decisions is recognizing patterns in vast amounts of data, sorting through choices and options, and responding quickly and accurately,” said Samuel Palmisano, IBM Chairman, President and Chief Executive Officer. “Watson is a compelling example of how the planet – companies, industries, cities – is becoming smarter. With advanced computing power and deep analytics, we can infuse business and societal systems with intelligence.”

Unlike conventional computing technologies designed to return documents containing the user’s keywords or semantic entities, Watson is expected to leap ahead to interpret the user’s query as a true question and to determine precisely what the user is asking for. Watson uses massively parallel processing to simultaneously and instantly understand complex questions – questions that require the system to consider huge volumes and varieties of natural language text to gather and then deeply analyze and score supporting or refuting evidence. The system then decides how confident it is in the answer.

This approach marries advanced machine learning and statistical techniques with the latest in natural language processing to result in human-like precision and speed, huge breadth and accurate confidence determination.

Inherent Challenges in Playing Jeopardy!
Competing on Jeopardy! poses an intense challenge for a computing system due to the variety of subject matter required; Jeopardy! demands knowledge of a broad range of topics including history, literature, politics, film, pop culture and science. Additionally, both the speed at which contestants must provide accurate responses, and because the clues given to contestants involve analyzing subtle meaning, irony, riddles, and other complexities at which humans excel and computers traditionally do not, creates an enormous challenge for a computing system. Just like human competitors, Watson will not be connected to the Internet or be able to access any other outside assistance.

In the video below IBM discusses natural language processing and Watson, their contestant.

History of Human-Machine Competition
In 1997, an IBM computer called "Deep Blue" defeated World Chess Champion Garry Kasparov in a famous battle of human versus machine. To compete at chess, IBM built an extremely fast computer that could calculate 200 million chess moves per second based on a fixed problem. IBM’s Watson system, on the other hand, is seeking to solve an open-ended problem that requires an entirely new approach – mainly through dynamic, intelligent software – to even come close to competing with the human mind. Despite their massive computational capabilities, today’s computers cannot consistently analyze and comprehend sentences, much less understand cryptic clues and find answers in the same way the human brain can.

"The challenge is to build a system that, unlike systems before it, can rival the human mind’s ability to determine precise answers to natural language questions and to compute accurate confidences in the answers,” said Dr. David Ferrucci, leader of the IBM Watson project team. "This confidence processing ability is key. It greatly distinguishes the IBM approach from conventional search, and is critical to implementing useful business applications of Question Answering."

"Progress on the underlying QA technologies enabling Watson will be important in the quest to understand and build ‘intelligent computing systems’ capable of cooperating with humans in language-related tasks previously out of reach for computers," added Ferrucci.

In 2008, IBM and Carnegie Mellon University, working with other universities, pioneered the Open Advancement of Question Answering (OAQA) initiative. OAQA aims to provide an architectural and methodological foundation for accelerating research collaboration in automatic question answering. IBM intends to invite universities to collaborate on Watson and other driving challenge problems to help demonstrate how a wide range of independently developed algorithms can be integrated and generalized.

For more information, visit the project's page on the IBM website.