The Obama administration's massive effort to consolidate the federal government's 1,100 data centers hits a key transition point today, which is the deadline for all agencies to submit final plans for how they will reduce their IT infrastructure. 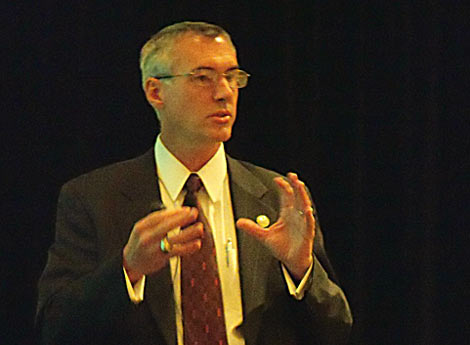 The Obama administration's massive effort to consolidate the federal government's 1,100 data centers hits a key transition point today, which is the deadline for all agencies to submit final plans for how they will reduce their IT infrastructure. As the deadline passes, the process shifts into a new phase, as the plans and budgets are reviewed by the administration and the Office of Management and Budget (OMB).

"We'll be spending September analyzing those plans and giving feedback, and seeing how they align with each agencies' budget goals," said Richard Spires, Chief Information Officer for CIO of the U.S. Department of Homeland Security. "Hopefully, by the end of the calendar year, OMB will be blessing these spending plans and we'll shift into the execution phase."

Spires is coordinating the government consolidation effort, which he described in a keynote presentation Tuesday at the DataCenterDynamics Washington DC conference. The process got underway back in March when Federal CIO Vivek Kundra directed federal agencies to prepare an inventory of their IT assets by April 30 and submit a preliminary data center consolidation plan by Aug. 31. These plans will need to be finalized by Dec. 31, 2010, with implementation beginning in 2011.

Key Step in a Longer Process
Despite those aggressive deadlines for assessing assets and developing plans, Spires said the actual consolidations will be a more deliberate process.

"This isn't about trying to do it in a year," he said Spires, adding that most agencies are working with a five-year timeline. "We've asked for plans that are aggressive but achievable. The federal government cannot continue as it has, building all these new data centers. We have got to change. You will see very focused energy around data center consolidation in the next five years."

The consolidation process will be "agency-specific," said Spires, which prompted a question about whether a cross-agency consolidation using a "GovColo" concept might get the best efficiency out of the existing data center facilities.

"We've talked a lot about 'mega-centers' for the federal government that could provide space for multiple smaller agencies," said Spires, who said it was too soon to say whether those discussions would lead to opportunities to consolidate equipment from multiple agencies in the same facility. "We'll have to see the plans first."

That last bullet point is boosting expectations that a meaningful chunk of government IT operations will be shifted to a cloud computing model.

Cloud A Factor in Consolidation Plans
Spires said he expects some of the agency-level consolidation plans to include proposals to use cloud computing services. The General Services Administration is in the final stages of shoring up the requirements for a government-wide program to certify and accredit cloud computing products and services through a process known as the Federal Risk and Authorization Management Program (FedRAMP).

"I think General Services is doing a great job with FedRAMP," said Kimberly Nelson, Microsoft's Executive director of E-Government, and a former CIO for the Environmental Protection Agency. "The cloud offers huge promise, and government customers should be considering it. But there are issues, and the government has got to be smart enough to know what questions to ask of its cloud providers."

That's just one of many challenges, said Spires. "There's a lot of barriers to overcome," he said, noting that the drive to efficient data centers will require changes in culture at some government agencies. "In some ways, the technology itself is the easiest piece of all."