Servers That Generate Their Own Power

What if your web server could generate its own power? Applied Methodologies Inc. has been working for several years to develop prototypes of servers and switches that use waste heat to generate power. 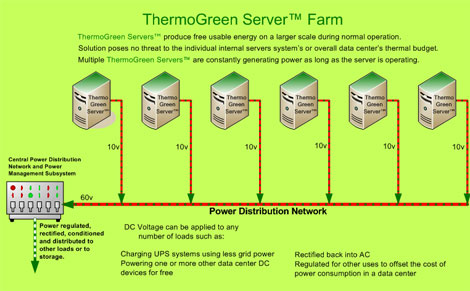 A diagram of how thermoelectric technology could be harnessed to use the heat from a bank of servers to generate energy (click for larger version of diagram).

What if your web server could generate its own power? Applied Methodologies Inc. has been working for several years to develop prototypes of servers and switches that use waste heat from the devices to generate power. The Wantagh, N.Y. company says its Thermoelectric Generation Systems (TGS) for servers and switches can recapture a portion of the energy used by the servers.

Thermoelectric effects can convert temperature differences into electric voltage. AMI says that although thermoelectrics is less efficient than other methods of waste heat recapture, it can have value when applied across a large number of devices. Power generated by racks of TGS-equipped servers could be used to support equipment in other parts of the data center (such as UPS units or networking gear) or to reduce the servers' power draw from the utility grid.

A growing number of data center operators are finding ways to harness the heat generated by racks packed with servers and use it to defray their energy bills. Temperatures in most data center hot aisles range from 80 to 115 degrees Fahrenheit (27 to 46 degrees Celsius), still fairly low temperatures for some heat recovery strategies. Companies like IBM, Telehouse, TelecityGroup and NetApp have used waste heat to help warm nearby offices or other parts of the data center.

In Development Since 2007
AMI has taken a different approach, seeking to convert the waste heat back into electricity to address the power needs of equipment within the data center. The TGS product line has been in the works since 2007, when it was introduced as the "ThermoGreen" server and featured in eWeek. AMI says it is continuing to refine the designs for its servers and switches, which were developed by Jeffrey Sicuranza. AMI is working on a method to allow servers to use the power recursively - meaning a TGS-equipped server could reduce its own power bill.

The company says a 1U TGS server can generate 10 volts and 5 amps at current efficiency levels. AMI is currently prototyping the approach to use some of the energy generated recursively, so the heat generated by a server could be used to offset that server's power requirements. Sicuranza said AMI is seeking additional funding to commercialize the product, and hopes to eventually partner with a major server manufacturer.

Seeking OEM Partners
"As with every startup, our major barrier is obtaining funding and executive help," said Sicuranza. "We would like to grow our products to either stand on their own or get them to the point of selling or licensing our system to the IBMs, Dells, HPs and Ciscos of the industry."

Sicuranza estimates that it will cost $10 to $20 per server to integrate the thermoelectric generators (TEGs) into a prototype. "Now, if this were the OEMs using our system they could purchases the TEGS and materials at far larger scale, at reduced prices," he said. "They already have the manufacturing platforms in place to integrate them with greater quality and efficiency plus with minimal change to their manufacturing system, thus keeping their costs down."

AMI has posted several YouTube videos of its prototype units in action. This introductory video in the series runs about 7 minutes: