Rackspace Hosting (RAX) added 8,510 customers in its cloud computing business in the second quarter of 2010, while boosting the revenue from each cloud customer, 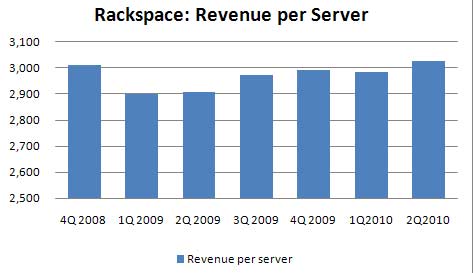 Rackspace showed improvement in the second quarter in revenue per server, a key metric of the mileage its getting out each server.

Rackspace (RAX) continues to offer the best window into the economics of cloud computing. Unlike its primary rival, Amazon Web Services, Rackspace provides detailed reporting on its cloud operations. And there was a lot to like in the numbers for the quarter ending June 30.

Rackspace's cloud business grew to 88,590 customers and generated $23.2 million in revenue for the quarter. The net revenue for each cloud customer grew from $240 a month to $262 a month.

Revenue Per Server Improves
Rackspace points to revenue per server as the best metric for assessing the value of its cloud computing business. In the second quarter, Rackspace’s revenue per server improved from $2,986 to $3,027 (see chart above). That $41 difference per server may not seem like a lot, but when multiplied by Rackspace's 61,874 servers it works out to about $2.56 million.

That type of improved efficiency is why Rackspace likes the cloud computing business over the long run. As we've previously noted, the cloud operation accounts for a fraction of the revenue of Rackspace's managed hosting business, but helps the company get more mileage out of its investment in server hardware. In the second quarter, Rackspace spent $29.6 million on customer servers.

More Mileage Per Server
Rackspace can host many cloud customers on a single server. A single managed hosting customer, on the other hand, may require many dedicated  servers. The cloud computing operation also gives Rackspace the ability to reuse servers from its managed hosting operation, extending their life by incorporating them into a cloud cluster (see Is Your Cloud New or Pre-Owned? for more).

That's what Rackspace CEO Lanham Napier is referring to when he talks about cloud computing boosting the "capital efficiency" of his company's operations. "The cloud is providing a disproportionate share of our growth," said Napier. "It's going to generate a lot of value for us."

The company's results earned kudos from analysts at Morgan Stanley and The Motley Fool. Rackspace followed that up today by announced the general availability of its Cloud Servers for Windows offering, which had previously been in beta.