eBay plans to use data center containers at a new facility, and has issued a public request for proposals through the Data Center Pulse industry group. The winning design will be used in an 8,000 square foot data center that eBay is building in Phoenix. 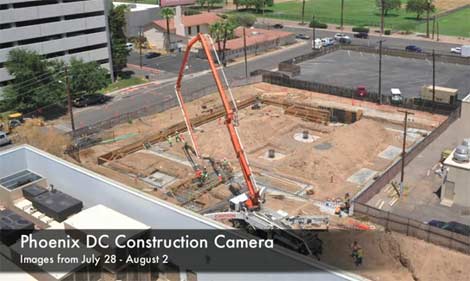 eBay plans to use data center containers at a new facility, and has issued a public request for proposals through the Data Center Pulse industry group. The winning design will be used in an 8,000 square foot data center that eBay is building in Phoenix, which will be able to accommodate up to 12 server-filled containers on its roof. The two-story building will also include raised-floor space on its first floor.

eBay joins a growing number of companies using containers as the basis for a modular data center design. Google and Microsoft have both built container-based facilities, while i/o Data Centers just announced plans to install 200 modules in its Phoenix data center.

eBay is also building in Phoenix, where it already operates a major data center, and is seeking a design that will provide the highest possible density in a facility with 4 megawatts of power capacity.

eBay's plan was outlined by Dean Nelson, eBay’s Senior Director of Global Data Center Strategy, who is also a co-founder of Data Center Pulse. Eight companies have already been selected to compete for the job, all of which have industry experience including previous container-based projects. Nelson said at least 22 other submissions hjave met the criteria to be considered for the project. The RFP process closes on August 20.

"We knew this was going to be a challenging RFP because of the design requirements to accommodate current, emerging and future technologies in a highly flexible manner," Nelson says. "In the past, specific vendors were selected to participate in Ebay RFPs. We believed that this approach could limit innovation.  It also excluded the companies that we are not aware of."

The eBay project calls for a combination of approaches to cooling and reliability, using both air cooling and liquid cooling in different parts of the facility. Nelson said one goal of the design is to have containers that can use fresh air cooling (free cooling) year-round, despite the temperatures in Phoenix. For more details, see Nelson's blog post and the RFP overview. Here's a video in which Nelson outlines the project and discusses eBay's design goals and process: