<img src="/sites/datacenterknowledge.com/files/wp-content/uploads/2010/07/unique-data-centers.jpg" width="470" height="332" / Across the globe, many data center designs use enormous creativity in building unique data centers. These are not your run-of-the-mill server rooms, but truly one-of-a-kind facilities that have a personality all their own. 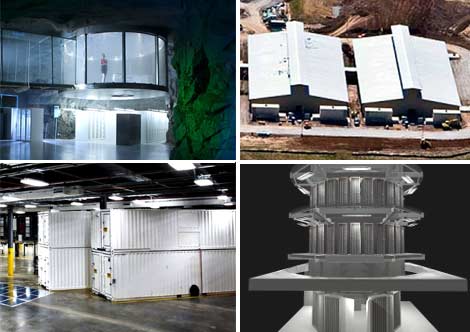 Across the globe, many data center designs use an amazing amount of creativity in locating and deploying unique data centers. These are not your run-of-the-mill server rooms, but truly one-of-a-kind facilities that have a personality all their own.

There is more to data center design than the straightforward mechanical approach, according to Rob Snevely, author of Enterprise Data Center Design and Methodology. "The detailed process of data center design appears on the outset to be a purely mechanical process involving the layout of the area, computations to determine equipment capacities, and innumerable other engineering details," Snevely writes. "They are, of course, essential to the design and creation of a data center, however, the mechanics alone do not a data center make. The use of pure mechanics rarely creates anything that is useful, except perhaps by chance." He goes on to discuss design philosophies that go back to classical times.

The data centers we present below have gone beyond the ordinary, incorporating innovative methods of using the layout, building or environment to create unique data center designs that work for the 21st century.

"The Spy Who Loved Me" Bunker
The Bahnhof "James Bond Villain" Data Bunker in Stockholm, Sweden

Nestled in the granite rock of the Vita Berg Park 100 feet beneath Stockholm, a unique facility operated by Bahnhof, one of Sweden's largest ISPs, has multiple unusual features: greenhouses, waterfalls, German submarine engines, simulated daylight and the ability to withstand a hit from a hydrogen bomb. Albert France-Landrd, the architects who designed the project in a former military anti-atomic-bomb shelter, stated that the starting point of the project was to consider the rock as a living organism. From the space-themed conference room to the NOC with a jungle-theme featuring many lush green plants, this data center is truly tricked-out.

Encompassing more than 700,000 square-feet, Microsoft’s $500 million Chicago data center is one of the largest data centers ever built. And it's highly unique as well. The lower level houses 40-foot former shipping containers packed with web servers in a garage-like setting, while a second story houses traditional raised-floor data center space. Parking spaces in the ”container canyon” are occupied by containers packed with servers and, in some cases, equipment to power and cool the servers. A central spine provides hookups to the containers on the lower level and power distribution equipment is located on the mezzanine level. With double-stacked containers, portable stairs are used to provide access to the second-level container.

The Greenest of the Green
IBM Green Data Center, campus of Syracuse University

IBM calls this data center at Syracuse University its “greenest” facility to date. Although it is small in size at 12,000 square foot, the facility uses a combination of approaches to reduce power and cooling impacts. The facility includes: micro-turbine engines fueled by natural gas, absorption chillers, the reuse of waste heat in nearby buildings, DC power distribution, and rear-door liquid cooling for each cabinet. Through running this data center, IBM and Syracuse are developing data on the most effective way to use these technologies in tandem in a data center for the best collective power savings.

Microsoft’s new data center in Dublin uses far less energy and water than typically consumed in other data centers of this scale. The facility will power much of Microsoft’s global cloud computing operation. The Dublin center operates at a Power Usage Effectiveness (PUE) of 1.25, Microsoft says, compared to averages of about 2.0 for the industry and 1.6 for other Microsoft facilities. The design innovations driving this project's efficiency include a “free cooling” system that uses outside air to cool the data center and a server pod design that employs hot-aisle containment to support warmer operating temperatures inside the server space.

Circular Data Center in a Silo
The CLUMEQ Supercomputer in Quebec

The CLUMEQ supercomputing center in Quebec partnered with Sun Microsystems to convert a huge silo into a data center. Previously housing a Van de Graaf particle accelerator, the cylindrical building is 65 feet high and 36 feet wide with two-foot thick concrete walls. The CLUMEQ Colossus cylinder features an interior “hot core” (as opposed to a hot aisle) in the center of the building and uses the outside ring of the facility as the cold air plenum. The cabinets are arranged in a ring on each floor, facing the outside of the silo. The floors supporting each ring of cabinets are comprised of grates rather than solid flooring to facilitate airflow through the facility.

HP’s innovative new data center in Wynyard, England leverages cool fresh air from the North Sea making extensive use of free cooling – the use of outside air rather than refrigeration to keep servers cool. Although many large data centers are now using free cooling, the HP Wynyard facility features an innovative airflow scheme that uses the entire lower floor of the facility as a cooling plenum. The Wynyard data center, which was begun by EDS prior to its acquisition by HP, is notable for its implementation of multiple energy efficiency measures.

Iron Mountain, a traditional leader in document storage, uses underground “nuke proof” data bunkers to store its customers' digital data in its own data center. The huge underground facility in western Pennsylvania is part of the company’s push into the data center sector. Iron Mountain bought the former limestone mine, which houses 1.7 million square feet of space, in 1998 and created an energy-efficient data center known as Room 48 in a section of the former mine.

The Phoenix ONE data center is an example of reusing an existing property. Its building was finished in 2005 to house the former bottling operations of LeNature’s Beverages. The 538,000-square-foot facility includes more than 80,000 square feet of premium office space, allowing i/o Data Centers to use the site as both a data center and its corporate headquarters. The company is using both solar power and thermal storage to save on energy costs for its huge operation.

Located not far from Niagara Falls in upstate New York, the Yahoo Computing Coop is the result of a five-year effort to completely rethink the company’s data center design. The Yahoo team refined its approach and is building faster, cheaper data centers that will be dramatically more efficient than previous facilities.And yes, each building does look like a huge chicken coop. “The building itself is an air handler,” says Scott Noteboom, the Director of Data Center Operations for Yahoo. “The entire building is meant to breathe, and there’s a lot of louvers and dampers to control the airflow.”

Being both carrier neutral and carbon neutral is the strategy behind EvoSwitch, located in the Netherlands. EvoSwitch is doubling the size of its Amsterdam data center to meet customer demand for space in its facility. The 100,000 square foot (9,285 square meter) data center houses the European infrastructure for Wikipedia. EvoSwitch is supported by 20 megawatts of power capacity that is generated entirely from sustainable sources by Delta power, which uses a mix of solar, wind and biomass in its power generation.