<img src="/sites/datacenterknowledge.com/files/wp-content/uploads/2010/07/goog-capex-2Q2010.jpg" width="477" height="256" /> Google is building again. After several years of muted investment in its data center infrastructure, Google reported capital expenditures of $476 million in the second quarter of 2010, more than doubling its spending from the previous quarter.

Google (GOOG) is building again. After several years of muted investment in its infrastructure, Google reported capital expenditures of $476 million in the second quarter of 2010, more than doubling its spending from the previous quarter. The latest capital expenditure (CapEx) number marks the company's heaviest investment in its data center operations since the second quarter of 2008, when Google was wrapping up a flurry of construction projects in North Carolina, South Carolina and Iowa.

The $476 million is less than Google spent at the peak of its data center building boom, but a big jump from the $239 million in capital spending in the first quarter of 2010, and the $221 million in the fourth quarter of 2009. A capital expenditure is an investment in a long-term asset, typically physical assets such as buildings or machinery. Google says the majority of its its capital investments are for IT infrastructure, including data centers, servers, and networking equipment. The company's CapEx spending has closely tracked its data center construction projects, each of which requires between $200 million and $600 million in investment.

Here's a look at the recent trend in Google's capital expenditures: 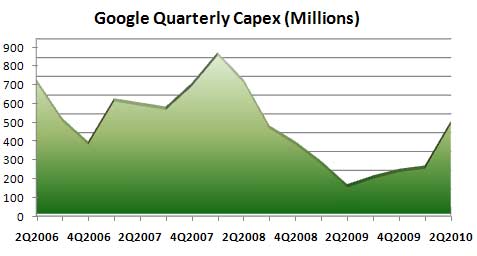 Microsoft has recently begun construction on a new data center at its campus in Quincy, Washington, and has also restarted a project in West Des Moines, Iowa that was put on hold in early 2009. Microsoft is also said to be scouting potential data center sites in Virginia and North Carolina.

Where's the Money Going?
So where is Google spending its CapEx dollars? Google has not announced any new data center builds in the U.S. since June 2007, and has confirmed just one international project  in Hamina, Finland. After the economic meltdown gripped Wall Street in the third quarter of 2008, Google throttled back its capital spending.

The second-quarter jump in infrastructure investment could mean that Google has commenced work on unannounced data center construction projects. Google has often sought to maintain secrecy about its data center development, but that approach has become harder to maintain as the company has taken advantage of tax incentives to reduce operational costs in recent builds. These economic development incentives typically require approvals from local and state officials, widening the circle of awareness of the projects, which often are given code names.

Expanding Existing Sites?
Another possibility is that Google has begun to ramp up construction on additional phases of existing data center campuses. The company's recent projects typically include plans for two and sometimes three data center structures in a single location.

Google's recent CapEx "breather" has been enabled by the company's building boom in 2007-08, during which it announced major data center construction projects in Lenoir, North Carolina; Goose Creek, South Carolina; Pryor, Oklahoma and Council Bluffs, Iowa. In late 2008, Google announced that it would delay construction of the Oklahoma project.