<img src="/sites/datacenterknowledge.com/files/wp-content/uploads/2010/07/colt-modular.jpg" width="470" height="328" /> UK provider Colt this week introduced a factory-built modular data center design that the company will use to build its own facilities and data centers at customer premises. Colt says the design allows it to deliver new space in just four months. 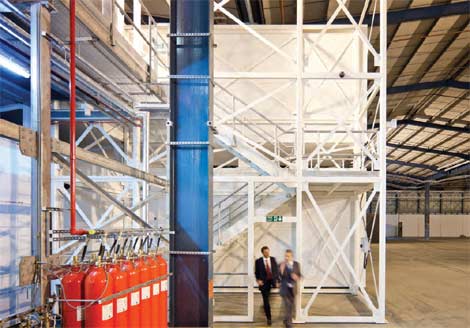 This working Colt Modular Data Center features modular, factory-built components that are assembled on-site, allowing a new data center to be delivered in as little as four months.

UK telecom and managed hosting provider Colt has introduced a factory-built modular data center design that it will use in its own facilities and to build data centers at customer premises.

Colt says its modular approach allows it to deliver power-efficient, turn-key data center halls to customers in less than four months. The design, which uses pre-assembled components that are more flexible and configurable than standard shipping containers, offers the option to build large-scale data centers in increments of 500 square meters (5,400 square feet), each supporting 750 kilowatts of power.

Tested Off-Site
Colt’s Modular Data Centres are manufactured, staged and tested at factories before being transported to the project site, where Colt will reconstruct and commission the data centre – all within four months.

Colt is delivering the product for European customers, but it continues an industry shift towards an "industrialization" of data center design featuring modular building blocks that are built in factories and assembled at the project site. Microsoft and Digital Realty Trust have been among the U.S. companies advancing this approach.

"The launch of Colt’s Modular Data Centres will redefine the way in which our customers can address their growing need for high quality data center space," said Rakesh Bhasin, CEO of Colt, who said the new design will "substantially reduce deployment times as well as helping them to minimize the environmental and cost impacts associated with the consumption of power."

Colt said the facilities are built to a Tier III specification on the Uptime Tier System, with each 5,000 square meter module supported by four 850 kVA backup generators and an N+N UPS system that provides 10 minutes of ride-through time.

The modules are designed to operate at a Power Usage Effectiveness rating of 1.21 at full load, according to Colt's technical specs (PDF).