Hamilton: Pace of Innovation is Quickening

The pace of innovation in data design is accelerating, according to James Hamilton of Amazon, who says companies must look beyond conventional assumptions about data center environments and their cost. 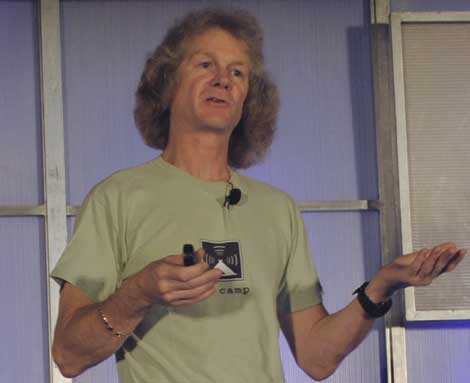 James Hamilton of Amazon speaking Wednesday at the Velocity 2010 conference.

When it comes to thinking outside the box, at least one data center designer is thinking about the X-Box. As the industry debates whether higher temperatures will affect the reliability of servers, James Hamilton of Amazon Web Services says some obvious test cases are being overlooked.

"Game consoles are wild, multi-core servers running as hot as they can run," said Hamilton. "They run in the worst conditions on the planet, and they run fine."

Hamilton, who discussed data center innovation Wednesday at the O'Reilly Velocity 2010 conference, isn't advocating that server environments seek to replicate conditions in your teenager's bedroom. But he said data center designers are beginning to look past historic assumptions, and that openness to new approaches is critical to solving tough design problems.

'Quickening Pace of Innovation'
There's a wildly quickening pace of innovation in data center design," said Hamilton. "This has accelerated in the past two years. Data center infrastructure used to be a cost center. For most companies, it's just not the most important thing they do, so the pace of innovation has been lethargic. With Google and Amazon running at incredible scale, the costs have become more interesting."

The growing focus on cloud computing, and the accompanying Internet-scale infrastructure, has created an environment in which small design wins can translate into large cost savings when applied across thousands of racks and servers.

"Cloud services are huge, and they're going to have a long-term impact," said Hamilton. "There's a lot of low-hanging fruit here, and that's what I've been chasing."

In seeking to make data centers more cost-effective and efficient, companies must first sort out where the cost profile of their data center - and sometimes that means looking beyond conventional wisdom on the topic.

Servers Are Biggest Line Item
"There's been lots of confusion about where the money goes in IT infrastructure," said Hamilton. In a typical data center with 8 megawatts of power capacity, Hamilton said servers represent 54 percent of total cost, followed by power distribution and cooling (21 percent), power (13 percent) and networking (8 percent).

"Power and cooling is not the number one cost," said Hamilton. "The cost of servers and storage is trending down, while the cost of power is trending up. Over time it will become the dominant cost, but it's not today. People often don't know the data."

Big Changes Ahead in Networking
Looking ahead, Hamilton predicted that end users will soon see more innovation and more choices in the hardware and software powering their networks.

"We're very close to a fundamental change in the networking world," said Hamilton, who said the industry is beginning to look beyond tightly integrated vendor offerings. He envisions a future in which data center operators can more easily mix and match hardware and software from disparate sources, including open source offerings.

"We'll get our Linux of the networking world," Hamilton said.

UPDATE: The Velocity team has posted video of Hamilton's talk: