A majority of IT executives at federal agencies say they believe the Obama administration will succeed in consolidating the government's data centers. But they don't believe the project can meet its ambitious timetable, and say government culture is the primary obstacle to success. 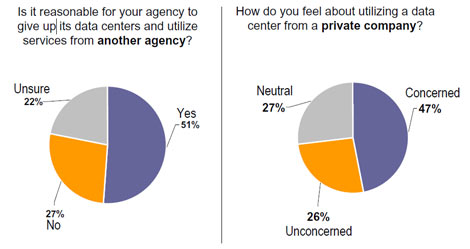 Two pie charts showing Federal IT managers attitudes towards aspects of the planned consolidation of more than 1,100 federal data centers.

A majority of IT executives at federal agencies say they believe the Obama administration will succeed in consolidating the government's data centers. But they don't believe the project can meet its ambitious timetable, and say government culture is the primary obstacle to success.

Those are the key findings from a MeritTalk survey of 143 federal IT professionals and systems integrators in a May 2010 event in Washington, D.C. to assess the consolidation. The survey, which was underwritten by storage provider NetApp, found that 63 percent of federal IT executives are confident that consolidation will happen, but 74 percent believe that the goals will not be achieved by the timeline outlined in the guidance.

The federal government has begun what looms as the largest data center consolidation in history, hoping to dramatically reduce IT operations that are currently distributed among more than 1,100 data centers.

Plans Ready by Year-End
In March, Federal CIO Vivek Kundra directed federal agencies to prepare an inventory of their IT assets by April 30 and develop a preliminary data center consolidation plan by June 30. These plans will need to be finalized by Dec. 31, 2010, with implementation beginning in 2011. President Obama says he expects the process to “produce no less than $3 billion in cost savings by the end of fiscal year 2012.”

Significantly, the MeritTalk study found that the Federal IT community is unclear on the target number of data centers following the successful consolidation – 13 percent say 900; 17 percent say 700; 14 percent say 500; and 19 percent say 300.

“This new study sheds light on the gap between the vision outlined in the OMB guidance and the detailed execution required by the Federal agency data center leads as they move toward meeting the deadlines and milestones,” said Mark Weber, president of U.S. Public Sector at NetApp. “We conducted this survey shortly after the initiative’s April 30th deadline for agencies to conduct initial data center audits – as Feds were in the midst of compliance. This report reveals a timely opportunity for OMB to improve guidance, set realistic timelines, and clarify the goals to allow Federal agencies to reap the initiative’s benefits.”

MeritTalk's analysis calls on the Office of Management and Budget (OMB) to improve the guidance by:

Why are some still skeptical about consolidation actually happening? Eighty-six percent of respondents say that government culture is the top consolidation obstacle. Though 76 percent agree that shared infrastructure platforms are the best option, only 51 percent say that it would be realistic for their agency to give up its data centers and utilize services from another agency. Further, 47 percent say they would be concerned about utilizing a data center from a private company.