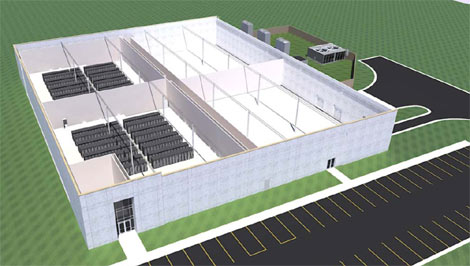 A design for one of the sites being developed by Five 9s Digital in Catawba County, North Carolina.

North Carolina's profile as a destination for data center development has been boosted by the arrival of Google and Apple. But the state's favorable climate is nothing new to the team at Five 9s Digital, a new data center company with deep roots in the Charlotte market.

Sites Near Apple iDataCenter
Several of the company's development properties are in Catawba County on land near the new Apple data center in Maiden, N.C. One of the sites was actually used by Apple to test some of its data center equipment bound for the Maiden facility.

Hollidge says the arrival of Apple and a Google data center in Lenoir in 2007 have boosted interest in the region. "The high-profile projects have certainly raised awareness," said Hollidge, adding that their site location decisions simply brought to light the existing advantages of the area.

"In North Carolina you have an attractive infrastructure in place on multiple levels," said Hollidge, who said the region's many textile and manufacturing plants required significant power capacity, as well as the water and sewer infrastructure essential to large-scale data centers.

Incentives Play A Role
Then there are the incentives, which served as major carrots in attracting Apple and Google. "The state of North Carolina has identified data centers as an attractive sector," said Hollidge, who also noted the "very attractive" incentives on sales and use taxes on equipment.

Five 9s Digital's current property portfolio features a diverse mix of sites offering options from 48,000 to 700,000 square feet of development space. The upper end is represented by an 84-acre Burke County property that Five 9s is positioning as a data center campus.

Acquisitions and Sale-Leasebacks
Hollidge also sees opportunity in the market for sale-leaseback deals, A sale-leaseback option typically involves a property owner selling their building to a second party, while agreeing to continue to lease space in the building. The transaction generates cash for the former owner (now the tenant), and provides the new owner steady rent from the lease.

"Sale-leasebacks create an opportunity for a company to raise capital," said Hollidge. "They can control the asset by signing a long-term lease. There are also some owners of these facilities that are not in the data center world. We can come in with our knowledge base and help tenants in those properties that may need to expand."