The online science fiction game universe EVE Online is moving into new space in its existing data center in London, where game operator CCP Games has deployed a 12-cabinet cluster of servers. 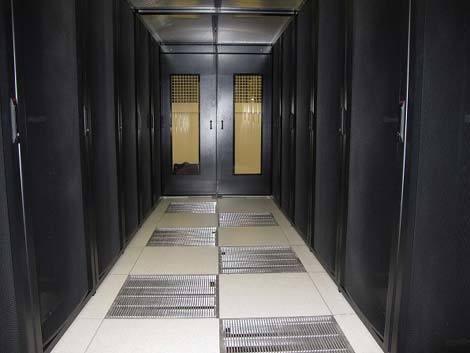 A look at the cold aisle containment system housing the new server cluster for the sci-fi onlune universe EVE Online.

The online science fiction game universe EVE Online is moving into new space in its existing data center in London, where game operator CCP Games has deployed a 12-cabinet cluster of servers. The new deployment will house the Tranquility (TQ) cluster, which powers the EVE Universe of more than 330,000 players (except for Chinese users, who play on the separate Serenity cluster).

"It's gotten to the point were a couple of cabinets simply don't handle it anymore," writes Derek Wise, CCP's Technical Director, in a blog post describing the new infrastructure. "This will provide better network connectivity, fewer intermediary devices and increased capacity."

The new cluster runs IBM blade servers with 280 total cores, and more than 4.8 terabytes of local storage. The Tranquility cabinets require 79 kilowatts of power and are housed in a cold-aisle containment system to manage airflow and server waste heat. "Cold air from the center of the aisle is force-fed into the cabinets reducing the loss or wasted cool air significantly and helping to focus cold air where it's needed most," Wise writes. "This takes the industry standard "hot aisle/cold aisle" designs a step further without having to do anything crazy like running servers under nitrogen pools (although that is pretty cool)."

The EVE universe will migrate to the new cluster on June 23. See Wise's post on the EVE Insider Dev Blog for more.