Cloud computing represents just 2 percent of the revenue in the IT infrastructure market, according to Tier 1 Research. But not for long, as cloud computing is the fastest-growing business model in the sector, and will grow to more than $1 billion a year in revenue by next year.

Despite all the buzz and hype it has generated, cloud computing represents just 2 percent of the revenue in the IT infrastructure market, according to Tier 1 Research. But not for long, as cloud computing is the fastest-growing business model in the sector, and will grow to more than $1 billion a year in revenue by next year.

“Slowly but surely, that 2 percent will become a bigger piece of the pie,” said Antonio Piraino, the Research Director of Tier 1, in his keynote message at Wednesday’s Datacenter Transformation Summit in Reston, Va.

Clouds Are Customers, Not Competitors
Tier 1 Research tracks the market for third-party data center providers, a universe that includes hosting companies as well as data center developers who lease turn-key "wholesale" space. Although cloud computing is seen as a potential replacement for in-house server rooms and company-owned data centers, many cloud services require their own data center space, and lease it from colocation providers and data center operators. Piraino said cloud services are creating customers for data centers, not competition. 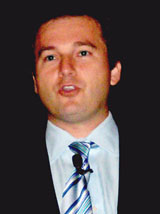 "Data centers will always be around," he added. "They’re necessary for cloud services to exist. But whose data center will that cloud live in? Yours or someone else’s? You need to consider how you’ll play that cloudy game."

Sean Hackett, the Research Director of CloudScape for The 451 Group, agreed that for most data center providers, cloud computing represents an opportunity, not a threat. "This will translate into increased demand for the stuff you sell," Hackett told the audience of more than 200 data center professionals. "This shift means a lot to you."

Hackett said a recent Tier 1 survey found that 6 out of 10 small businesses plan to implement either IaaS or software as a service (SaaS) in the next 12 months. "Small businesses are using the cloud to do things they couldn’t do before," said Hackett.

Small businesses' enthusiasm for cloud services may translate into lost customers for some providers offering shared hosting and dedicated servers. Piraino said the impact of cloud providers will be felt first by these "mass market" hosting firms.

"Cloud will be disruptive in some cases, and additive in others," said Hackett. While some cloud computing services may drain customers from traditional hosting companies, they "will drive demand for more hosting and more data center space."

Enterprise Adoption Growing Slowly
Hackett said enterprise use of cloud services shows a similar pattern to corporate adoption of other outsourced services. "They’re dipping a toe in the water," said Hackett. "The cloud’s not just for the SMBs anymore. We’re seeing enterprises start to really throttle up their uses of the cloud. Most are in the pilot stage, but they’re getting used to leveraging the cloud."

Tier 1's analysis is supported by research released Thursday by BroadGroup, a UK consultancy that tracks the data center sector. The report predicts that enterprise adoption of "private cloud" services will accelerate over the next five years, and will boost business for third party data center outsourcing. Private clouds use a cloud model to deliver services to an in-house audience, rather than to the public Internet.

'Complex and Interesting Market Structure'
"The signs are that a complex and interesting market structure will evolve over time," said Marion Howard Healy, a Senior Consultant at BroadGroup. "A significantly higher proportion of enterprise data center space will be outsourced by 2015. In our view this could be as much as 35 percent by 2015."

While many cloud computing providers will occupy leased colocation or third-party data center space, some will shift their business to huge public clouds served out of massive data centers. Amazon and Google loom as the leading threats to data center providers, with the potential to compete for customers and shrink margins.

"It’s a new class of competitor, built from the ground up to live in the cloud," Hackett noted. "Amazon really likes the idea of the commodity play. They can live with operating margins that are half those of their competitiors."