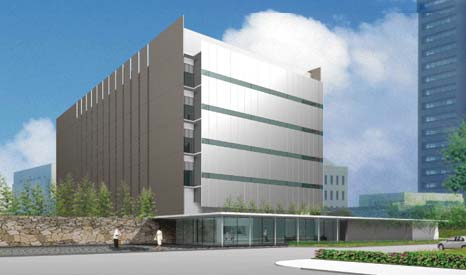 A visualization of the KVH TDC2 data center, which is being built near Tokyo.

KVH Co. said last week that it plans to complete construction on its new KVH Tokyo Data Center 2 (TDC2) by February 2011. Located just outside of Tokyo in Inzai City (Chiba Prefecture), the data center is the company's second commercially available facility in the Toyko metro area. The facility will provide turn-key  data center space for Japanese, U.S. and multi-national corporations in the Japanese market.

"KVH realizes that in a world of ever-increasing computing capabilities, power, not space, is the critical and scarce resource within the data center facility," said Miyuki Suzuki, KVH CEO.  "KVH's TDC2 has been designed to push the limits on power with the goal of satisfying customers' current and future power needs.  With the possibility of additional data center space on this property, we will be able to continue to incorporate the latest power, cooling and green technologies as they evolve and subsequently provide 'future-proofing' to our customers."

Approximately 40 minutes from the central Tokyo business district by a new high-speed train link opening in July 2010, Inzai City will be 25 minutes travel time via the same train line in the opposite direction to Narita International Airport, providing easy accessibility to KVH TDC2.

At the same time, Inzai is farther away from active fault-lines and tectonic plate boundaries than Tokyo and thus meets Japan FISC (The Center for Financial Industry Information Systems) guidelines as a business continuity planning site for companies with a primary data center in Tokyo.  As such, the area is recognized as a ''disaster recovery location.''

In addition, KVH TDC2 also incorporates "green IT" technologies and design features to maximize efficiency and reduce overall power consumption of the facility.  These features include water-side free cooling from fall to spring to reduce power consumption, high-efficiency equipment that adjusts output based on need and strictly maintained humidity levels within server halls allowing for higher temperature set points. KVH TDC2 is forecasted to achieve an annual average Power Usage Effectiveness (PUE) rating of less than 1.5, far exceeding the industry standard of 2.0.