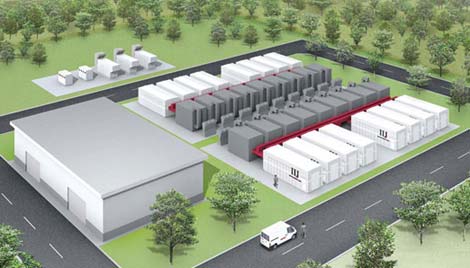 A depiction of a design concept for the new modular data centers from IIJ of Japan.

IIJ has tested facilities with container units that use outside-air-cooling, and with test results showing a Partial Power Usage Effectiveness (PUE) of under 1.1. With those results, IIJ believes it can achieve its year-round PUE target of 1.2, and so has moved into commercial production.

IIJ will use this data center as a facility for the IIJ GIO cloud service, and will expand those facilities to an estimated 20 modules (housing 5,000 servers) as demand for the service rises. The firm expects that this data center will reduce the current facility costs of IIJ GIO by 40 percent, raising the cost competitiveness of the cloud service and reducing annual CO2 emissions by about 4,000 tons in comparison with conventional data centers.

The current investment plan calls for 5 modules (housing 1,600 servers) to be built and operational by February 2011 at a cost of about JPY 1.1 billion.

IIJ noted that it used partial PUE, a measurement that does not include the power consumed by UPS, the power distribution board and other elements. The PUE metric (PDF) compares a facility’s total power usage to the amount of power used by the IT equipment, revealing how much is lost in distribution and conversion. An average PUE of 2.0 indicates that the IT equipment uses about 50 percent of the power to the building.