<img src="/sites/datacenterknowledge.com/files/wp-content/uploads/2010/05/Infinity-ONE-schematic-470.jpg" width="470" height="285" /> HP Labs got a lot of press attention Tuesday for describing a way to use methane harnessed from cow manure to power a data center. But the concept HP described in an research paper is already being built into a UK data center. 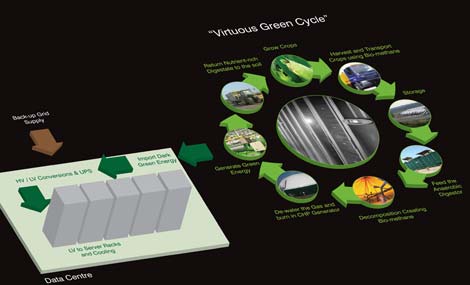 A diagram of how the Infinity ONE data center in the UK will use biomaterial in a combined heat and power (CHP) installation to provide energy for its data center (click to see a larger version).

HP Labs got a lot of press attention Tuesday for describing a way to use methane harnessed from cow manure to power a data center. But the concept HP described in an academic paper (PDF) is not new, and a similar concept is already being built into a UK data center that has won awards for its approach.

The Infinity ONE data center in East Anglia, England is working with a local farming co-op to use biomaterial from local farms to power a combined heat and power (CHP) plant that will provide electricity for the data halls. The process will also creates fertilizer, which can then be used on the farmland.

Nearing Production Stage
Infinity says its approach, which it calls Dark Green Energy, predates the HP Labs announcement and is nearing the production stage. Late last year the company installed an anaerobic digester plant and biomass generators at the Infinity ONE data center campus, which is already operating using utility power from the National Grid. The facility doesn't use cow manure, but instead uses biomass from the local farms.

"The Infinity ONE development proves that 21st century data centres can be deployed with little environmental impact," said Martin Lynch, the CEO of Infinity SDC. "The data centre and its dark green power source are surrounded by the farmland that supply them and provide a significant enhancement in income to the local agricultural community as well as providing organic nutrient to our diminishing soil quality – it’s a truly virtuous circle which supports two vital sectors."

The biomatter is supplied by Agri-Gen Ltd., a group of cooperating farmers, and is broken down in an anaerobic digester, a large airtight tank. This process produces two by-products: methane and a nutrient rich "digestate" effluent. The methane gas is  used as fuel for the data center's CHP plant, which will support the 5,000 square foot data halls at Infinity ONE. The digestate fertilizer is returned to Agri-Gen using bio-methane powered transportation for use in 22,000 acres of local farmland.

Design Earns Industry Award
Last December the Infinity ONE design received the 2009 Datacentre Leaders Award award from DataCentreDynamics in the category of "Future Thinking and Design Concepts."  One of the runners-up in the category was HP Enterprise Services (formerly EDS)  for a fresh air cooling design.

The research featured this week by HP Labs was presented Wednesday at the American Society of Mechanical Engineers (ASME) International Conference on Energy Sustainability in Phoenix, Arizona. While touting the proposal as outside-the-box thinking, HP acknowledges that the concept is not original.

From Villages to Data Centers
“The idea of using animal waste to generate energy has been around for centuries, with manure being used every day in remote villages to generate heat for cooking," said Tom Christian, principal research scientist, Sustainable IT Ecosystem Lab, HP. "The new idea that we are presenting in this research is to create a symbiotic relationship between farms and the IT ecosystem that can benefit the farm, the data center and the environment."

HP calculates that a farm of 10,000 dairy cows could generate 1 megawatt of electricity, enough to power a typical modern data center and still support other needs on the farm. This illustrates the scale challenge that accompanies many types of renewable energy (particularly solar) in meeting the energy requirements of larger data centers that require capacity of 10 to 20 megawatts or more.

Addressing Economics and Scalability
Small biogas installations are not always economical for individual farms, particularly when natural gas prices are low, as noted by the New York Times. Co-operatives like Agri-Gen address this by aggregating farms to make bulk sales of manure to power companies, as seen in New York state.

HP addresses another intriguing alternative in its Poerpoint presentation, suggesting that scale could be achieved by building data centers adjacent to industrial farms or feedlots, which can house up to 100,000 cows as they are prepared for slaughter. While these facilites would provide ready access to large quantities of manure, the EPA has raised concerns about their impact on nearby water supplies and air quality.

Here's a video of Chandrakant Patel of HP Labs explaining its research: