A look at Telehouse America, a pioneer in the colocation business that launched in 1987 and services financial and online media customers from facilities in Staten Island and at 25 Broadway in Manhattan. 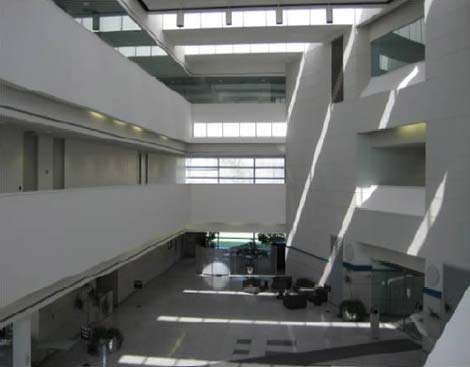 The atrium of the Telehouse America Teleport facility in Staten Island, where the company began offering colocation services in 1987.

Telehouse America is no stranger to competition, and has thrived through both bull and bear markets in more than 20 years providing mission-critical colocation services to the financial sector in the New York area. That's why the arrival of new competitors and new data centers doesn't unsettle executives at Telehouse.

"It's extremely competitive," said Fred Cannone, Director of Sales & Marketing at Telehouse America. "It's no secret that some of our comptitors have brought on new space and want to fill it. The competition is really coming from the facilities that have come online in New Jersey."

Founded in 1987
Telehouse America is a pioneer in the colocation business, having launched in 1987 as a joint venture between Japanese telco KDDI and partners in the banking and securities industry. Telehouse got its start in the Staten Island Teleport, a high-tech business park funded by the Port Authority of New York and New Jersey. With its proximity to Wall Street and a satellite uplink, the location was ideal for the Japanese financial institutions who were many of Telehouse's early customers.

Telehouse America expanded into lower Manhattan with its 25 Broadway facility in the Cunard Building, directly across the street from the Wall Street Bull statue. The building's fifth and sixth floors house 85,000 square feet of colocation space.

25 Broadway is also home to the New York International Internet Exchange (NYIIX), Telehouse estimates that the NYIIX is the busiest public Internet exchange point in the city. The NYIIX offers fast fiber connectivity to the New York market’s other major carrier hotels, including 60 Hudson Street, 111 Eighth Avenue, 32 Avenue of the Americas, and 165 Halsey Street in Newark, as well as the Teleport Center in Staten Island.

Adding Managed Services
After many years of focusing primarily on colocation, Telehouse America introduced managed services offerings in 2009. "Increasingly, the model is shifting from traditional colo to what we believe is a total solution," said Cannone, who said the company's Manage-E services range from simple monitoring up to managing a company's entire IT functions. "People can buy individual slices of those services."

Financial services remains a key vertical, followed closely by online media and gaming. Telehouse America is not capacity constrained, Cannone said, noting that the Staten Island Teleport "is at about 40 percent of power capacity, so we have plenty of headroom."

Globel Interlink Extended
On June 1 Telehouse America will begin offering its Global Interlink service to customers colocated at 60 Hudson and 111 Eighth Avenue. Companies with equipment housed in either location can connect via low latency Ethernet to all of Telehouse's data centers in the US, UK and France at speeds up to 1 Gbps.

"Over 400 customers at both facilities can now connect to Europe via Global Interlink, ensuring they meet their specific transatlantic and metro connectivity needs, while reaping the benefits of Ethernet technology," said Vincent Corley, Telehouse America's Senior Marketing Manager. "This expansion strengthens the power of Global Interlink service by providing connectivity into the major communication hot spots of the US."