At Green.Net 2010, Google's Bill Weihl provided a look at how it uses vinyl data center curtains to create a low-cost containment pod in one of its corporate server rooms. 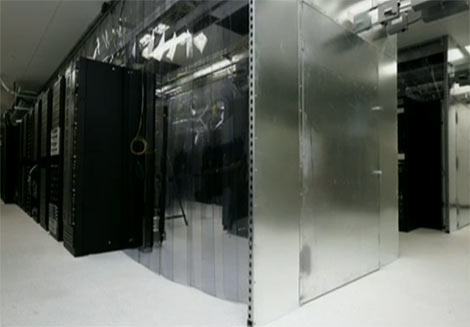 A look at a flexible containment system used by Google in one of its company server rooms, which combines a metal framework with plastic air sealant curtains.

Yesterday's Green.Net 2010 conference in San Francisco included several sessions relevant to the data center sector, including a presentation on data center energy efficiency by Google energy czar Bill Weihl. Most of Weihl's talk reviewed approaches that Google has previously disclosed in industry conferences. But there was one slide in his presentation that will be of interest to Google watchers.

In discussing the importance of isolating cold and warm air in the data center, Weihl provided a look at a design Google uses to create a low-cost hot aisle containment pod in one of its corporate server room.

"Rather than big, complicated, expensive construction, we basically put metal end-caps on the rows," said Weihl. "And then we've used effectively the kind of curtains you'd use in a meat locker in a grocery store to keep cold air from infiltrating with the hot air, and vice versa.

"The reason we're using those is that we can put any rack in there we want. All we need to do is roll up the curtains, wheel in a rack and then drop the curtain down on top of the rack and it's effectively sealed off," said Weihl. "So there are very cheap solutions you can apply in virtually any data center that will greatly reduce if not eliminate the potential for the hot and cold air to mix."

Data Center Curtains in Spotlight
Clear vinyl data center curtains are offered by vendors including Simplex, and are being used in a growing number of facilities, including high-profile sites like Sun's Colorado data center. Steve O'Donnell at The Hot Aisle has long argued for curtains as a pragmatic approach to airflow separation. In highlighting isolation strategies using curtains, Weihl focused on best practices that are accessible to companies with modest data center operations.

Google emphasizes that many of its energy efficiency strategies can be implemented by anyone. That's true of the curtains, but less so for the Google UPS design featuring an on-board battery, which requires a custom server build.

He noted that this design is used in a company server room, and not one of the company's production data centers. This fits with Google's effort to contribute to the industry conversation on efficiency without revealing the current state-of-the-Google-art found inside an existing production data center.