IT infrastructure provider Terremark Worldwide (TMRK) has launched construction of the third data center at its NAP of the Capital Region campus in Culpeper, Virginia, the company said today. The company will invest $45 million in the 50,000 square foot facilty. 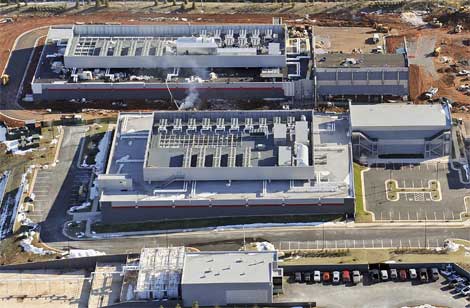 An aerial view of the NAP of the Capital Region, showing the first two completed data center buildings at the Terremark campus.

IT infrastructure provider Terremark Worldwide (TMRK) has launched construction of the third data center at its NAP of the Capital Region campus in Culpeper, Virginia, the company said today. Terremark said more than 75 percent of the existing data center space was under contract and it is seeing "robust pipeline" with strong demand from Federal government agencies and large enterprises.

Terremark will invest approximately $45 million to build out the 50,000 square foot facility. The NAP of the Capital Region opened in June 2008 with the completion of the first 50,000 square foot pod on a 30-acre campus designed to accommodate up to five data centers. Terremark began construction of a second facility in early 2009.

“The success of our NAP of the Capital Region campus has surpassed our initial expectations, and we believe the expansion of our data center footprint there will serve as a key catalyst for the continued growth of our company,” said Manuel D. Medina, Terremark’s Chairman and CEO.

“Our position as the leading cloud computing provider for Federal government agencies, along with the heightened drive for greater efficiency for IT systems within the U.S. government and the increase in IT spending trends among enterprises, has helped fuel our success in Virginia," Medina continued. "These key market drivers combined with our proven ability to reliably provide public and private-sector customers with world-class IT infrastructure solutions from an ultra-secure datacenter campus continue to drive positive results for Terremark, and we expect this new facility to help us build on that success.”