At least two existing Google facilities have been equipped with treatment plants, allowing them to operate their water-hungry cooling systems without tapping the potable water supply from local municipalities. A third Google data center uses a rainwater collection system for its water supply. 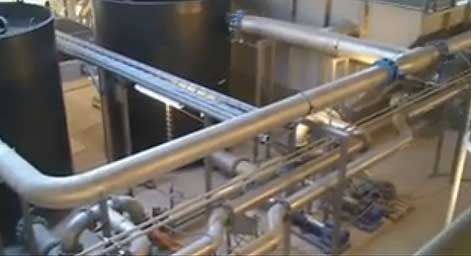 A look at some of the infrastructure inside a Google water treament plant at its data center in Belgium.

In Google's latest customization of its infrastructure, the company has outfitted at least two existing data centers with water treatment plants, allowing them to operate their cooling systems without tapping the potable water supply from local municipalities. A third Google data center has just deployed a rainwater collection system that will support much of its operations.

As data centers come under closer scrutiny for their water usage, Google and other leading technology companies are working to limit their facilities' impact on the local water supply and sewage system. Google has developed one of the most advanced programs to use recycled water in its data center cooling systems, and also works closely with municipalities to ensure that its operations don't overwhelm the capacity of local sewer systems.

"You need a holistic approach to water management," said Joe Kava, Google's Director of Operations. "Water consumption isn’t a side thought; it’s part of our larger environmental management policy. In the future this will be at the forefront of data center operations."

The water recycling effort reflects Google's focus on sustainability, but is also an investment in reliability, according to Erik Teetzel, an Energy Program Manager at Google. When a data center depends on water to operate, reducing water disruption scenarios is part of risk mitigation. "It's very important for us to be able to run on our own terms," said Teetzel.

Water Management A Growing Priority
The enormous volume of water required to cool high-density server farms is making water management a growing priority for data center operators. A 15-megawatt data center can use up to 360,000 gallons of water a day, according to one estimate. The Carbon Disclosure Project, which has persuaded some of the world’s largest corporations to disclose their greenhouse gas emissions, recently announced a program to pressure public companies to also issue detailed reports on their water use.

Google hopes to use recycled water for up to 80 percent of the company's total data center water consumption by the end of 2010. "The idea behind this is simple: instead of wasting clean, potable water, use a dirty source of water and clean it just enough so it can be used for cooling," Google says on its water management web page. "Cooling water still needs to be processed, but it's much easier to treat it enough for data center use compared to cleaning it for drinking use."

Tapping Local Bodies of Water: In its facility near Saint-Ghislain, Belgium, Google draws water from the nearby Nimy Blaton canal instead of using the municipal water utility. The company has built a 20,000 square foot water treatment plant to clean the canal water to the point that it can be used in the cooling towers for its data centers. The plant separates sediments from the water, recycling any solids and sludge removed during the process. After chemicals are added to prevent microbial growth, the treated water is pumped to the data center via an underground piping system. See Google's Data Center Water Treatment Plant for a video of the facility.

Recycling Municipal Waste Water: At one of its U.S. locations, Google has built a data center adjacent to a large wastewater treatment plant operated by the local county government. Google has built a "sidestream" treatment facility to tap some of the output of the county plant. "We treat that water and use it in our cooling systems," said Kava. Google is also building an effluent plant that will release clean water back into a nearby public waterway.

Harvesting Collected Rainwater: Early this year Google completed work at another of its U.S. data centers on a plant that will process rainwater runoff that is collected in retention ponds on its property. The site was landscaped to funnel rain into the two ponds, according to Kava, who said the system will provide between 40 and 100 percent of Google's water needs at different times of the year.

Kava wouldn't identify the location of the two U.S. treatment plants, but said both were in areas where the local water system is "stressed," raising the priority of reducing the data center's impact.

At the Google data center using the wastewater treatment plant, the company is also working with local water management officials to stage the release of waste water. The local sewage system is near capacity, so Google is "queuing and batching" waste water and releasing it in a metered fashion when capacity is available.

"In some of these municipalities, the sewer systems don’t have a lot of capacity,” said Kava. "We work with water management officials to find out where challenges are. We generally initiate these discussions right after site has been selected. Almost immediately we are working on the water management aspect, to see if our operations can be customized to help them with their pain points."

No One-Size-Fite-All Solution
Google is pursuing different approaches to water recycling and management because there's no one-size-fits-all solution available, according to Teetzel. "A lot of the water management considerations are very site dependent," he said. "So our approaches are very local and based on local conditions."

Water conservation and management "is something we take really seriously at Google," said Teetzel. "We would really like to see more attention to this issue in the data center industry."