Digital production company Dr. D Studios has packed 30kW a cabinet of power into an APC hot aisle containment pod in a Sydney data center to render the animated penguins for "Happy Feet 2." 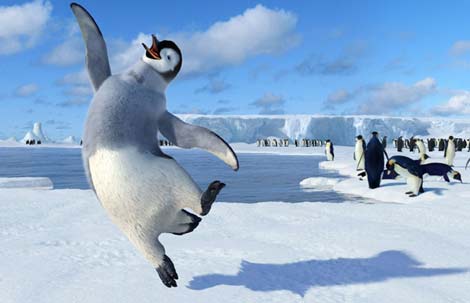 The Australian data center powering the animated Penguins from the 2007 feature "Happy Feet" has been slimmed down, packing its supercomputing power into an APC hot aisle containment pod.

In the sequel to "Happy Feet," the Penguins will be the same size. But the data center will be smaller. The digital production company Dr. D Studios has packed a large amount of supercomputing power into a smaller package in its new rendering facility in Sydney, Australia.

Happy Feet producer George Miller has since founded Dr. D Studios, which has taken the lead on animation for the sequel and is preparing a new supercomputer grid cluster for rendering "Happy Feet 2" as well as visual effects for "Fury Road," a fourth film in the Mad Max series. The first 1,000 cores of the new system are online and placed in an APC hot aisle containment pod.

From 150 Chassis to 24
Sydney-based Dr. D Studios is enjoying the advances in compute density as they fit everything into just 24 chassis, instead of the 250 that it took for the original Happy Feet.  James Bourne, infrastructure engineering manager for Dr. D sums it up nice by saying that "back [in 2005], we were working with single-core [Intel] Xeons; as hyperthreading was of little benefit.  Each blade had two cores then - now they have eight - and 16 per node should hyper-threading be turned on.  Memory density has increased as well now from 1.5GB per node to 24GB."

The original data center Animal Logic used to render Happy Feet was an Equinix facility in Sydney.  Now that 30kW of power per cabinet is needed for the sequel, Dr. D Studios turned to APC pods to provide water cooled housing in an E3 Networks data center. This allows provisioning of 6,000 cores in a space of no more than 10 x 5 meters (32 x 16 feet).

HP blade servers will be used for the 6,000 cores.  The space and power available to Dr. D in the E3 facility will allow it to scale the cluster to 12,000 cores if necessary.  Peak rendering, in mid-2011 is expected to surpass 6,000 cores and hopefully land a second Australia supercomputer on the Top500 list.

Several Expansions for Pegasus Site
The E3 Networks Pegasus data center in Sydney has had several expansions and has a 110 square meter (1,184 square foot) suite for Dr. D Studios.  The E3 data center is close to Global Switch, Equinix and a Dr. D facility in Carriageworks, Redfern and will be connected by Internet Service Provider Cincenet. Australia's iTnews recently covered the facility specifications as well as a video tour, which is embedded below: