New Jersey's data center geography is expanding southward to include a growing market for wholesale data center space in central Jersey, where some of the industry's largest players are building new facilities. 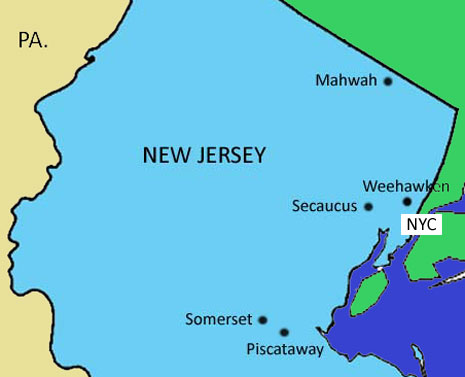 A map of northern and central New Jersey, showing the locations of prominent data center hubs.

The data center market in New Jersey has traditionally focused on colocation facilities and single-tenant data centers in several northern counties located directly across the Hudson River from Manhattan and the Wall Street companies that drive demand. But the Garden State's data center geography is now expanding southward to include a growing market for wholesale data center space in central New Jersey, where some of the industry's largest players are building new facilities.

New Jersey is one of the most active data center markets in the country. It’s also an interesting case study in some of the trends sweeping the industry, including the drive towards more efficient use of capital – a trend that has been accelerated by the financial meltdown of 2008 and the discipline it has imposed on key data center users in the NJ market.

"New Jersey is really the best petri dish in the country for some of the changes in the data center industry," said Chris Crosby, senior vice president of corporate development for Digital Realty Trust. "New Jersey was the quintessential do-it-yourself market. But in the last five years it's become one of the most interesting markets for outsourcing. What we’re seeing is a true reflection of the balance between risk and control."

Emergence of Wholesale Model
That balance has boosted interest in the wholesale data center model, in which a tenant leases dedicated, fully-built data center space. The model offers greater control and security than shared colocation space, and is quicker and cheaper than building an entire data center facility. The tenant pays a significant premium over typical leases for office space, but is spared the capital investment to construct the data center.

But it's not a fit for everyone. The economics of wholesale space are attractive to companies requiring at least 1 megawatt of power capacity for their data center.

Digital Realty Trust (DLR) has been an early mover in the development of the central New Jersey market. The company was already a major player in the northern New Jersey market with a 300,000 square foot facility in Weehawken that serves as a key hub for high-frequency trading by Wall Street firms. In 2006 Digital Realty purchased 3 Corporate Place, an empty commercial building in Piscataway, and transformed it into a wholesale facility that now houses data centers for two major hosting companies and a currency trading firm.

In 2008 Digital Realty bought two more buildings in the area to support additional demand for data center space. 365 South Randolphville Road in Piscataway is a 270,000 square foot facility that is being leased as both Turn-Key Datacenter (wholesale) space and as Powered Base Building (powered shell). Nearby is 650 Randolph Road in the Somerset section of Franklin Township, which houses an early customer in Digital Realty's POD Architecture custom design program.

"We think New Jersey is one of the strongest markets in the country," said Hossein Fateh, president and CEO of DuPont Fabros.

Sentinel is new to the Jersey market but operated three data centers in Massachusetts and Connecticut, which it recently sold to Digital Realty Russo has specialized in construction of single-tenant data center buildings for financial companies in North Jersey.

Shifts in Geography, Philosophy
The growth of the wholesale market in central Jersey represents a shift in both geography and philosophy. Piscataway and Somerset are further south than the traditional data center hot spots in Hudson and Bergen counties, where companies like Equinix (Secaucus) and Savvis (Weehawken) have built thriving businesses selling low-latency colocation services to financial firms. Single-tenant financial data centers have also focused on the northern New Jersey locations.

But Piscataway and Somerset are within the data center "donut" - a ring of land in New Jersey that has become the focal point of data center development for New York’s financial industry, its inner and outer boundaries defined by criteria for disaster recovery and the limitations of real-time data replication.

Location isn't the only shift. Although about 40 percent of large enterprise companies continue to prefer operating their own single-tenant data center, some enterprise and financial companies have turned to the wholesale model as a way to continue to expand their IT operations while using less capital.

"Capital is clearly a driver towards some of the turn-key solutions," said Crosby. "We see a lot of demand from financial services and Fortune 500, as well as system integrators. The interest (in wholesale space) tends to be sector-dependent. The more advanced the IT organization, the more open they are to outsourcing."

'Maturation of the Industry'
"We are now starting to reap the benefits of the education we’ve been doing and the maturation of the data center industry," Crosby said. "I think that bodes well for our industry."

A key selling point for the wholesale data center model is speed-to-market, as companies like Digital Realty can deliver finished space in months, as opposed to the 18 to 24 month timetable for new data center construction. That difference could be telling in a market where companies have been delaying expansion plans, with some describing pent-up demand for space.