After signing its second tenant, Power Loft is forging ahead with development of additional space at its new two-story data center in Prince William County, Virginia. 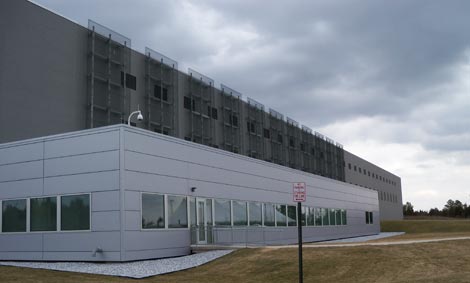 Sometimes you have to be ahead of the curve to reach the finish line at the right time. That's the story for the new Power Loft LLC data center in northern Virginia, according to president and CEO Jim Coakley.

Back in 2006 the Power Loft team and data center designer Peter Gross began developing plans for a two-story data center that would create a “hard separation” between the server area and the mechanical equipment. The speculative project rode out the financial crisis, and came online in December with CapGemini as its first tenant.

"This is the right product at the right time," Coakley said Thursday as he welcomed local officials from Prince William County to the facility for a ribbon-cutting ceremony, where Horizon Data Solutions was announced as the facility's second tenant, leasing 12,500 square feet of space.

LEED Silver Certification
Power Loft was designed for both high efficiency and high density. The $330 million project has earned a Silver certification under the LEED (Leadership in Energy and Environmental Design) benchmark for energy efficiency in commercial building.

The data center has 50 megawatts of power capacity from the Northern Virginia Electric Cooperative (NOVEC) and employs a flexible "hybrid power" distribution system from Validus DC Power that offers users the option of AC or DC power. The company also says it use of larger air handlers makes its cooling system more efficient, giving the facility a reported Power Usage Effectiveness (PUE) of 1.28.

Power Loft says it is able to maximize every square foot of the temperature-controlled raised floor area to support a power density of 300 wats per square foot across its footprint.

The lower floor houses air handling units (AHUs) that deliver cold air through the ceiling and into the 4-foot-high under-floor plenum of the second story. The hot air exits the top of the server pods and is returned to the lower floor through channels along the side of the building.

The Power Loft facility is equipped with louvers on the side of its facade, allowing it to use  fresh air "free" cooling for part of the year. An adjacent facility houses the Hitec rotary UPS (flywheel) and switchgear, while another building is dedicated to the generators and chillers.

New Design Brings Benefits, Challenges
The design offers multiple advantages compared to most legacy data centers. But as a new company marketing an unconventional design in the midst of a sharp economic downturn, Power Loft faced many challenges as well.

At last Thursday's event, Coakley praised his capital partner, Iron Point Partners, for its support. Iron Point is also a backer of Validus and T5 Partners, which is marketing Power Loft to national clients in addition to its data center development work in North Carolina.

"In the wake of the recent leasing momentum, we have initiated the next phase of
construction in advance of demand, partially in anticipation of an improving economy and partially to insure that we have adequate space and power to meet immediate demand," said Coakley.