Rackspace Hosting (RAX) says revenue per server is the best metric for assessing the value of its growing cloud computing business, noting the gap between revenue from its cloud customers as managed hosting clients. 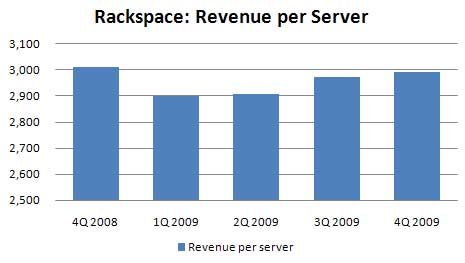 In seeking to sort out the economics of cloud computing, we've previously examined data from Rackspace Hosting, which has been the most forthcoming among cloud computing providers in disclosing details of its operations. We examined these numbers using average revenue per user (ARPU), a common metric for evaluating web hosting performance.

In its recent conference call, Rackspace suggested revenue per server as a better metric for assessing the value of its growing cloud computing business. A look at the net revenue generated by each of Rackspace's 56,671 servers shows an upward trend over the past four quarters from $2,899 to $2,991 (see chart above), even as net revenue per cloud customer has declined.

"We really focus more on revenue per server than revenue per customer," said Rackspace CFO and treasurer Bruce Knooihuizen. "If you try to correlate our revenue to the number of customers, it's going to be all over the board. from a capital utilization and capital deployment (perspective), and an ability to see where our business is going, the revenue per server is probably a better measure.

"We can put a lot of cloud customers on a piece of hardware, where that same piece of equipment may only be able to hold one managed customer," he added. A single managed hosting customer, on the other hand, may require many dedicated  servers. The cloud computing operation also gives Rackspace the ability to reuse servers from its managed hosting operation, extending their live by incorporating them into a cloud cluster (see Is Your Cloud New or Pre-Owned? for more).

"When you think about unit economics in our business, (revenue per server) is a much more compelling and probably more important statistic," said Knooihuizen.

That data also suggests a rationale for the company's strategic shift to a strong focus on cloud computing. Rackspace's base of managed hosting customers has remained largely static over the past three quarters at 19,300, while it has added 20,000 customers in its cloud business during that period.

For Rackspace, the cloud operation is the best way to expand in the small business hosting market, where most companies can’t afford managed hosting services. Meanwhile, many of Rackspace’s enterprise managed hosting customers are watching the evolution of cloud computing and over time may want to shift applications to the cloud model.

Service Revenue to Follow
Rackspace CEO Lanham Napier notes that this as cloud computing matures, a growing number of customers will seek broader suites of services to support their cloud operations.

"As we roll out additional services into the cloud, we will be able to increase our price point on those services to customers," said Napier.

How are other cloud computing providers doing on a revenue per server analysis? We won't know until leading cloud providers offer the same level of detail that Rackspace has disclosed, including number of servers, number of cloud customers, and revenue for cloud and non-cloud customers.