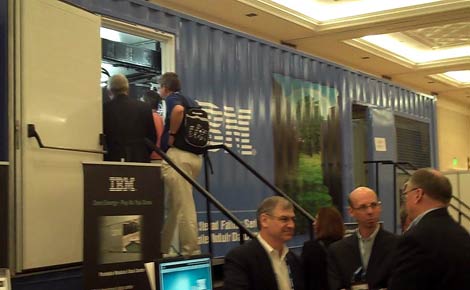 Power and cooling vendor APC by Schneider Electric today announced an expanded relationship with IBM to offer Big Blue's Portable Modular Data Center (PMDC) container based on APC’s InfraStruxure architecture. The PMDC provides a data center in a shipping container with a complete physical infrastructure including power and cooling systems and remote monitoring.

The announcement builds on the global alliance between APC and IBM announced in 2006 when APC was selected as an infrastructure provider for IBM's Scalable Modular Data Center (SMDC) and High Density Zone (HDZ) solution, which allows customers to deploy a high density environment rapidly within an existing data center.

APC previously announced a similar partnership with Datapod, an Australian company whose containers include specialized modules which can include “entrypods” that serve as access control man-trap systems or “utilitypods” holding generators and fuel tanks.

“APC’s data center physical infrastructure design lends itself well to IBM’s PMDC, focusing on maximizing efficiency through a modular and scalable approach," said Jim Simonelli, Chief Technology Officer for APC. "The pre-engineering and pre-testing we do for our products ensures the PMDC solution is highly reliable and available.”

“IBM’s partnerships with leading vendors such as APC provide customers with an efficient, cost-effective solution to support IT growth in a more flexible environment,” said Steven Sams, vice president, Global Site and Facilities Services. “The inclusion of APC technology is a result of our long-standing relationship with APC."

Partnerships are critical to IBM’s strategy in the container market, where it has followed a different path than several of its competitors. Rather than advancing a particular design vision, IBM has positioned its container as perhaps the most flexible of the major container offerings, promising to customize the PMDC to each customer’s requirements.

That includes the basic container configuration, as IBM offers its “data center in a box” in 20, 40 and 53-foot sizes, and can either place the mechanical and electrical gear in a separate container or have it share a single container with racks of IT gear.