Colocation provider Switch &amp; Data (SDXC) said today that its planned $700 million sale to Equinix (EQIX) will be delayed by requests for additional information from federal antitrust regulators. The company said the transaction is now likely to close in the second quarter of the year, rather than the first quarter. 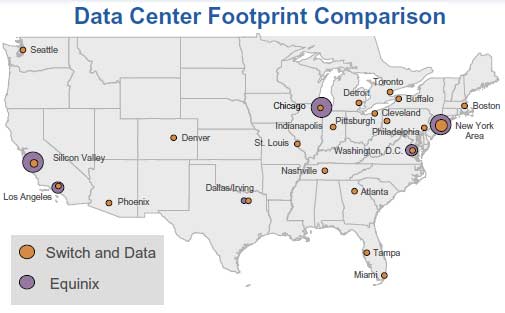 A map of the combined data center footprint of Equinix and Switch and Data.

Colocation provider Switch & Data (SDXC) said today that its planned $700 million sale to Equinix will be delayed by a request for additional information from federal antitrust regulators. The transaction is now likely to close in the second quarter of the year, rather than the first quarter as additionally anticipated, the company said today in a filing with the Securities and Exchange Commission. Switch and Data said it will go forward with a Jan. 29 meeting at which its shareholders will be asked to approve the deal.

The acquisition of Switch and Data by Equinix (EQIX), which was announced Oct. 21, combines two of the largest players in the market for colocation and interconnection services, and gives Equinix a presence in 16 new markets across North America. Shortly after the deal was announced, Equinix submitted information about the transaction to the Antitrust Division of the Department of Justice and the Federal Trade Commission as required under the Hart-Scott-Rodino (HSR) Antitrust Act.

After consulting with regulators, Equinix re-filed its submission on Dec. 7, starting a 30-day waiting period for the antitrust review, which was to expire Wednesday.

The SEC filing did not discuss any details of the information request from regulators, or whether it would have any impact upon the deal beyond the planned closing date. Requests for additional information from regulators are not uncommon in large acquisitions.

In an Oct. 21 conference call, several Wall Street securities analysts wondered whether the deal might invite antitrust scrutiny.”Rest assured, we’ve looked hard at this,” said Equinix president and CEO Steve Smith. “We are taking a position that the North American hosting market is a competitive market.”

Equinix says it has "low single digit" market share of a broadly-defined market that includes web hosting providers as well as colocation and wholesale data center providers. But Equinix and Switch and Data are arguably the two largest players in North America in the narrower niche of carrier-neutral colocation and peering services.