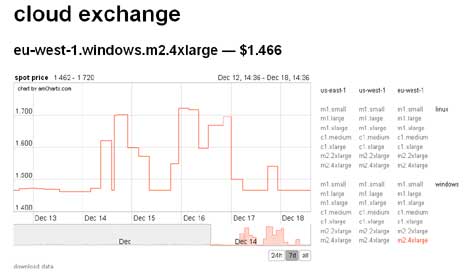 Earlier this week Amazon Web Services announced Spot Instances, which allows customers to buy computing power on Amazon's EC2 cloud computing platform based on fluctuations in price. This dynamic pricing allows customers to save money by running applications when prices fall below a designated level, or outbid other customers for available capacity. How can you take advantage of these pricing trends?

Cloud Exchange provides a visual interface for the spot pricing data Amazon is making available to developers. The app was developed by Tim Lossen (who has made the code available via GitHub) and graphs pricing data on different instance types in three availability zones. We found this site via Matt Sherman, who argues that pricing is Amazon's core competency.

Here are a couple of additional resources and data points regarding Amazon Web Services: