Rackspace and the Transition to the Cloud

Perhaps no hosting provider has navigated the shift to the cloud more smoothly than Rackspace (RAX), a company founded in the early days of the dot-com boom that has emerged as a major player in cloud computing. 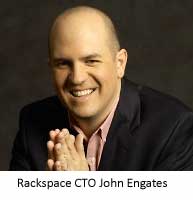 John Engates jokes that web hosting is "the original cloud computing." It's a reminder of the connection between the past and future for Rackspace Hosting. As the chief technical officer of Rackspace, Engates has helped steer the company through transitions driven by both technology and terminology.

As customers focus on the benefits of cloud computing, hosting companies are pondering the best way to reposition their product offerings to compete. Perhaps no hosting provider has navigated the shift to the cloud more smoothly than Rackspace (RAX), a company founded in the early days of the dot-com boom that has emerged as the second-largest player in cloud computing, according to some analyses.

In the first three quarters of 2009, Rackspace's cloud computing operation grew from 34,820 customers to 61,616. The company's revenue from cloud computing in the third quarter was $15.3 million, a fraction of the $147 million brought in by the company's managed hosting business, but more than double the $6.5 million from the same period in 2008.

Build, Buy or Partner
In its journey to the cloud, Rackspace confronted a key question facing hosting providers entering the cloud computing market: do we build, buy or partner? For Rackspace the answer has been "all of the above." Engates says this approach has provided Rackspace with the flexibility to address a variety of customer decisions.

Rackspace developed in-house capabilities through its Mosso unit, which started life as a reseller offering and evolved into the Rackspace Cloud. The San Antonio company also acquired e-mail specialist Webmail.us in 2007 and cloud storage specialist JungleDisk and virtual private server provier SliceHost in 2008. It also added capabilities through partnerships, such as a deal with Limelight Networks to offer content delivery to customers.

"We got an early start compared to some of our competitors," Engates says of Rackspace's push into cloud computing. "Many of our hosting competitors wanted to wait and see how things developed. Mosso gave us the engineering capability and confidence to go do it. It helped us do a reboot."

Right Solution at the Right Size'
"It's really given us a broader net to cast, to help open people's eyes to what hosting is," he said. "It's all about fit. We have a lot of options for customers, and are focusing on providing the right solution at the right size, even if it means less revenue. The economy helped drive that focus."

Many have advanced cloud computing as a revolutionary technology that will drive a wholesale change in how companies provision IT services. Rather than choosing between the cloud and the data center, many companies have sought to embrace the best of both worlds.

Blending Cloud and Dedicated
"A lot of our biggest customers are blending a VMware-based private cloud with dedicated servers," said Engates. "The philosophy of cloud computing is to get it out of your data centers. We see the public cloud as great for a certain set of customers. We have some customers that are cloud-only, and quite a few that are a blend. It's not a one-size fits all thing. You may still need a dedicated box.  We see more and more companies starting to blend the cloud and dedicated servers."

In the past year Rackspace has worked to knit its cloud components into a more unified offering, encompassing Cloud Sites, Cloud Servers and Cloud Files. The exception has been SliceHost,  which was founded by Matt Tanase and Jason Seats.

"The SliceHost brand had a huge following among developers," said Engates. "It was almost a 'cult of SliceHost.' We were looked at as the suits that were gonna mess it up somehow, and so we decided it was going to continue to exist as a developer brand."

"It was a surprise to see how quickly the pace (of adoption) accelerated," Engates said of Rackspace's cloud hosting. "It's such a frictionless transaction/ People can try it out with no risk at all. The cloud does need a runway, and the DuPont Fabros facilities were a nice option."