The Santa Clara, Calif., campus operated by Digital Realty Trust is home to three data centers with a Platinum or Gold rating under the LEED standard for energy efficient buildings. 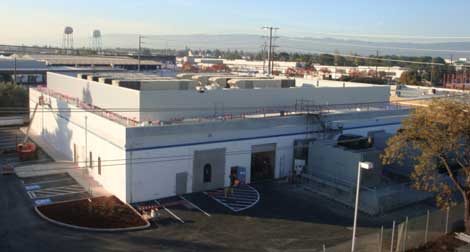 1201 Comstock is one of the Digital Realty data centers in Santa Clara, Calif. that has received a LEED Platinum certification.

SANTA CLARA, Calif. - An unassuming industrial park near San Jose Airport is hardly where you'd expect to find some of the greenest acres in the data center industry. The Santa Clara, Calif., campus operated by Digital Realty Trust is home to three data centers with a Platinum or Gold rating under the LEED standard for energy efficient buildings.

Digital Realty, the largest data center operator in the U.S., has used its Santa Clara operation to refine an energy efficient design using fresh-air cooling, which has made the site a magnet for some of the fastest-growing companies in the digital economy.

Facebook, Twitter and Yahoo all have their servers housed here. NVIDIA, which is seeking to harness its GPU technology to power cloud and high performance computing, has leased an entire data center here as well.

Clients Like LEED Data Centers
The LEED (Leadership in Energy and Environmental Design) standard is not designed with data centers in mind, and is just one of several indicators of the energy efficiency of a data center, along with Power Usage Effectiveness (PUE). But there are signs that the LEED designation is growing in importance for data center tenants, who like the standard as a benchmark for corporate social responsibility.

Where LEED certification was once seen as a difficult hurdle for mission-critical sites, companies like Digital Realty are demonstrating the ability to build data centers to the very highest levels of the specification, and do so with remarkable speed. The two LEED Platinum facilities at the Santa Clara campus were completed in less than eight months, far less than the 18 to 24 months typically required for an enterprise data center project.

The campus is anchored by the carrier hotel at 1100 Space Park Drive, which was Digital's first acquisition at the site and has tenants including AT&T, Verizon and Tata Communications. The operation has grown from there to include three other buildings:

The energy efficiency of Digital Realty's Santa Clara properties is driven by a design optimized to use fresh air in its cooling system, rather than relying on energy-intensive chillers and refrigerated water. This "free cooling" (also known as air economization) can be used for about 65 percent of the year in Silicon Valley.

Side Plenums and Raised Floor
Each data center has air handlers located on its rooftop, which draw in outside air. The air handlers move the air through side plenums wrapping around the side of each server room, and under the raised floor area. The air then enters the cold aisles through perforated floor tiles, where it can cool tenant equipment, and exits through the ceiling.

The company has also deeded a tract of land between 1100 and 1500 Space Park Drive to the municipal utility, Silicon Valley Power, for a new substation to expand the power capacity for the campus.

Eaerlier this month Digital Realty spent $90 million to acquire two data center facilities on nearby properties. The facilities at 1350 Duane Avenue, and 3080 Raymond Street are both fully-leased to Internet service providers.