A massive $1.5 billion data center project near Lockerbie, Scotland is a step closer to reality after receiving the blessing of local planning officials. 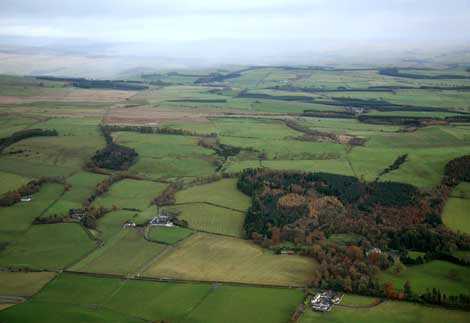 This farmland near Lockerbie, Scotland could become one of the world's largest data center developments. Construction is slated to begin next year on a $1.5 billion project by Lockerbie Data Centres.

A massive $1.5 billion data center project near Lockerbie, Scotland is a step closer to reality after receiving the blessing of local planning officials. Lockerbie Data Centres Ltd. proposed building the £950 million project, which it says may generate a total of £3.5 billion in investment in the region.

Planning officials at the local Dumfries and Galloway Council have recommended the company's application be approved by the town council, which will meet Nov. 25 to discuss the project. The developers hope this will lay the groundwork for construction to begin in mid-2010 and opening for business in late 2011.

Lockerbie Data Centres plans to build 250,000 square meters (about 2.6 million square feet) of data center space at the Peelhouses farm property, which is adjacent to the Steven's Croft biomass power facility. There is also a wind farm within 8 kilometers of the site, and the developers hope to have these renewable sources provide approximately half the energy used by the facility. Waste heat from the Lockerbie data centers will be reused in other facilities on the campus, and the cool Scottish climate will support using fresh air "free cooling" throughout the year.

The development will include a new business park providing around 18,000 square meters (about 195,000 square feet) of hi-tech office space, as well as a horticultural research and commercial greenhouses park that will bring additional jobs. The data centre itself will create 50 jobs with another 10 jobs for estate management.

The master development plan (PDF, 33 MB) calls for a series of modular one-story data centers that will be partially built into the landscape the facilitate "green roofs" to make the design more appealing in its aesthetics and sustainability. The data center will be developed in phases as dictated by market demand.

“We are delighted that planning officers have recommended for approval one of the most exciting projects currently taking place in Scotland," said David King, Project Director of Lockerbie Data Centres Ltd. "This is a major enterprise program that will be of considerable benefit, not only to Dumfries and Galloway, but to the whole of Scotland, creating thousands of jobs.

"Feedback from the local community has been extremely positive and this development will put Dumfries and Galloway firmly on the map as world leaders in data centre provision," King added.