NGD Gets Funding for Huge Facility in Wales

Next Generation Data Ltd has secured "significant" debt financing from a unit of the Royal Bank of Scotland, which will help it complete one of the world's largest data center projects. 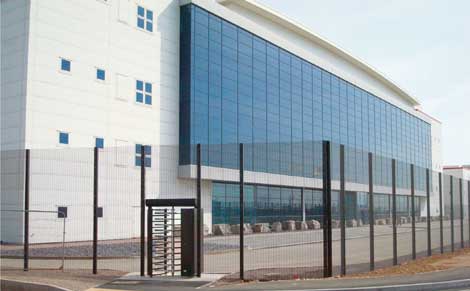 Next Generation Data Ltd has secured "significant" debt financing from a unit of the Royal Bank of Scotland, which will help it complete one of the world's largest data center projects. NGD is building a 750,000 square foot data center facility in the twon of Newport in South Wales.

The huge facility was previously used as an LG semiconductor plant, but has been empty since it was completed in 1998. NGD is converting the site into a three-story data center facility that will feature more than 375,000 square feet of technical space, enough capacity for more than 17,000 cabinets of servers and storage.

Financing Called 'Critical'
The developer said the funding from Lombard, the asset finance arm of the Royal Bank of Scotland, would help it meet its goal of having the first phase of the data center ready for occupancy in early 2010.

"In a very tough economic climate Next Generation Data is delighted to have won the support of Lombard which is absolutely critical to making this huge project possible," said company chairman Simon Taylor, who co-founded the business with fellow industrialist Nick Razey in early 2007. "We have always enjoyed a strong and very supportive relationship with the Welsh government but to have earned the additional backing of Lombard is indicative of the bank's confidence in our business fulfilling its considerable potential."

Container Docking Area
The NGD data center includes an area known as The Ballroom, which was originally built as a manufacturing floor, but is now being offered as a docking area for data center containers. The Ballroom features 120,000 square foot of open space, which the company says can hold up to 600 standard ISO containers double-stacked on a gantry system.

NGD says it has sold five private data suites to the Newport site to blue chip customers, who will move into the facility early next year. The company did not say how much it was borrowing from Lombard to complete construction on the first phase of the facility, but pegs the overall cost of the project at 200 million pounds (about $328 million US).