Speeding Up Those Chiller Restarts

Chiller vendors and data center operators are working together to speed up chiller restarts after a power outage, as seen in a recent collaboration between Johnson Controls Inc. (JCI) and RagingWire. 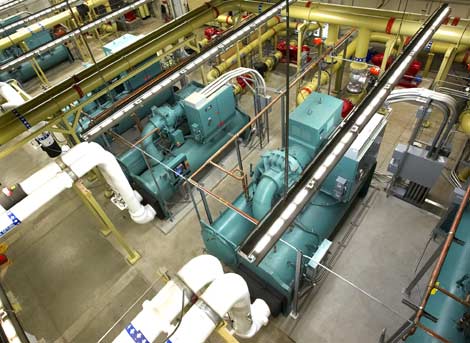 An overhead view of the chiller plant at RagingWire Enterprise Solution in Sacramento, Calif.

When a data center loses power, the goal is to get the servers back online as quickly as possible. But you can't restart all the servers until the cooling is working again. While servers can restart quickly, it often takes much longer to restart chillers, which provide refrigerated water for cooling systems.

Chiller vendors and data center operators are targeting this problem, as illustrated in a recent collaboration between Johnson Controls Inc.  (JCI) and RagingWire Enterprise Solutions, a Sacramento IT infrastructure provider. RagingWire has been the testbed for Johnson Controls' Quick Start software, which has accelerated the restart times for the providers' York chillers.

Three-Minute Restart
The Quick Start feature has reduced the time required for chiller restart and return to chilled-water setpoint from 13 minutes to less than three minutes during power interruptions or utility transitions, according to Jim Jim Kennedy, senior facility manager at RagingWire, which worked closely with Johnson Controls to jointly test the new capability.

While the Quick Start system was designed to speed recovery times, it is also yielding major energy efficiency benefits for RagingWire's chiller plan, which consists of six centrifugal chillers with variable speed drives, poviding up to 6,300 tons of cooling capacity for the 200,000 square foot data center.

Saving Energy by Running Warmer
The quick return to the specified chilled-water temperature has allowed RagingWire to raise its chilled-water temperature by 5 degrees F. Previously, both the chilled water and  supply air temperatures were set artificially low to provide "cushion time" to protect the equipment in the event of a power failure. The faster chiller restart time allows this buffer can be reduced, resulting in slightly warmer chilled water and supply air.

“The Quick Start technology has been the cornerstone of our chiller efficiency program,” said Kennedy. “By enabling us to increase our chilled water temperature setpoint by 5 degrees, the feature also saves as many as four million kilowatt-hours annually in our 24/7 environment. That translates to savings in the neighborhood of $320,000."

Johnson Controls isn't the only provider working on this issue. Trane has also developed chillers with a rapid restart feature (PDF) for its data center customers.