NetApp (NTAP) is opening the doors to its new energy-efficient data center located at its campus in Research Triangle Park (RTP), NC, which the company says will have an estimated PUE of 1.2. 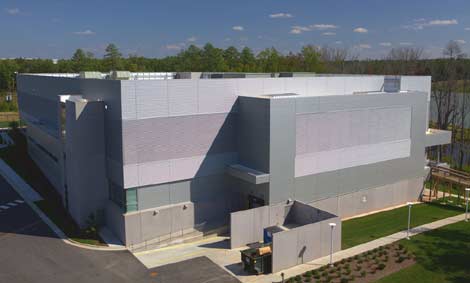 Today NetApp (NTAP) is opening the doors to its new energy-efficient data center at its campus in Research Triangle Park (RTP), North Carolina. The new facility will enable NetApp to consolidate its engineering facilities into a global dynamic lab (GDL) and will house NetApp's IT operations.

Estimated PUE of 1.2
The NetApp data center was designed with numerous features to reduce the energy needed to power and cool those servers, which the company estimates will result in a Power Usage Effectiveness (PUE) rating of 1.2.

The PUE metric (PDF) compares a facility’s total power usage to the amount of power used by the IT equipment, revealing how much is lost in distribution and conversion. A rating of 1.2 would place the NetApp facility among the most efficient data centers in the world, in roughly the same class as facilities operated by Google and Microsoft.

NetApp estimates that its focus on energy efficiency will generate savings of $7.3 million a year on the company's power bill and reduce its CO2 output by 93,000 tons a year - the equivalent of removing 15,400 cars from the road.

The energy effiency features at the RTP data center include:

NetApp said its software will help improve data management and storage efficiency in the data center. The company will use virtualization to build a private cloud environment to provide virtual access for NetApp engineering labs around the world.