1&amp;1 Internet has removed the data transfer quotas on its shared hosting plans, the company said this week, retiring one of the oldest metrics in the hosting industry. 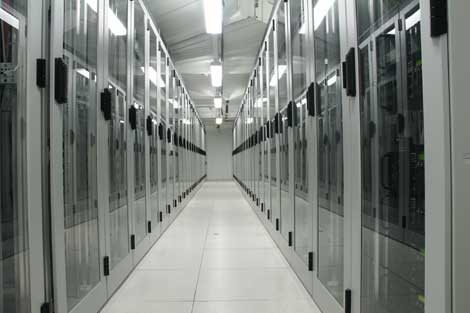 The interior of 1&1 Internet's data center in Karlsruhe, Germany.

One of the world's top web hosts is offering "all you can eat" bandwidth on all of its plans. 1&1 Internet has removed the data transfer quotas on its shared hosting plans, the company said this week, retiring one of the oldest metrics in the hosting industry.

The move by 1&1, which has more than 9 million customers, is the latest salvo in a long-running arms race between major shared hosting firms, who have been steadily super-sizing the disk space and data transfer on their accounts for the last three years.

Second-tier hosts have long touted controversial "unlimited" plans. It's widely viewed as a marketing gimmick that promises more than it can deliver- and far more than most web sites will ever require. In recent years the focus on service tiers based on disk space and transfer quotas has been blasted as geeky and confusing to customers.

The End of the Unlimited Stigma?
Tougher critics say unlimited account offers are “overselling” - promising disk space and bandwidth that the company doesn’t already possess - and misleading to customers. But any stigma began to erode when the industry's name brands broke down and joined the trend.

Yahoo introduced un unlimited plan in early 2008. In February Go Daddy also introduced an unlimited web hosting plan, with no quotas on monthly disk space or data transfer. At the time we called Go Daddy's move "a clear signal that quota-based pricing for shared hosting accounts is on its deathbed."

The unlimited hosting accounts offered by Yahoo and Go Daddy were premium plans priced at $11.95 to $14.99 a month. 1&1 Internet has gone one better. The huge host, which is based in Germany but has large operations in the UK and America, has lifted transfer quotas an all  of its accounts, including its$3.99 a month Beginner hosting account.

Lifting Quotas Across The Board
1&1 has also boosted disk space quotas on all of its accounts, which now start at 10 gigabytes for its entry-level plan. A hosting customer who chooses 1&1's $9.99 a month developer account will theoretically have access to 300 gigabytes of disk space and unlimited bandwidth.

From a marketing perspective, the offer of unlimited data transfer at these prices may appear to position these accounts favorably compared to dedicated servers and cloud hosting plans that promise more scalability. After all, what could be more scalable that "unlimited"?

All You Can Eat, But Small Bites Only
The catch is that these “all you can eat” plans only work if the bandwidth is consumed in measured doses. Shared hosting accounts can be fine for low-volume sites, but don’t usually scale for the kind of instant traffic that site owners probably envision when they see UNLIMITED.  In practice, these accounts are often capped or turned off during large traffic spikes.

Here’s why: in the shared hosting model, several hundred customer sites are housed on the same server. When one site on the server gets Slashdotted and begins using more resources, the server bogs down. The operation of one customer site begins degrading the performance of other customer sites - which isn’t allowed under most terms of service.

But 1&1's gambit serves as a reminder of the many millions of hosting customers who continue to flock to cheap shared hosting, even as cloud providers predict the coming demise of the entire sector. 1&1competes aggressively with Go Daddy and Yahoo - not to mention free offerings from Microsoft and Google - yet has managed to build a base of 9 million customers. The cloud may be coming, but 1&1 and other hosting stalwarts have virtually "unlimited" resourcefulness, if not unlimited resources.