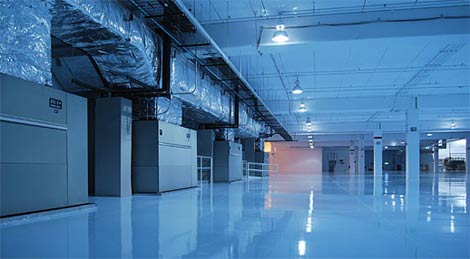 The interior of the Latisys data center in Oak Brook, Illinois, which has recently been expanded.

Latisys has completed an expansion of its Chicago data center, adding 9,000 square feet of high-density raised floor space, the company said today. Latisys has also accelerated the second phase of the expansion project, which is currently underway and will add an additional 13,000 square feet of space to the 86,000 square foot Oak Brook, Illinois facility in the third quarter of 2009.

The company said that 70 percent of the new expansion space was pre-sold, and the Oak Brook facility now houses approximately 70 managed hosting and colocation customers. Latisys has roughly doubled the size of its Chicago employee base since the beginning of the year and expects to add additional staff over the next six months.

"An increasing number of organizations are turning to our suburban Chicago facility as a cost-effective, secure and seamless way to address their long term need for additional data center space, power and services,” said John McCreary, general manager, Latisys Corp. “The completion of the first phase of our facility expansion and employee growth reflect Latisys’ commitment to providing customers with the scalability, flexibility and agility to grow and thrive.”

Credit Crunch a Demand Driver
Latisys said the expansion was driven by demand for additional space from Chicago-area companies that have maxed out the power and space in their existing facilities. It also noted that the tight credit markets have made it more difficult to raise funds for data center expansion, leading companies to opt for outsourcing their requirments rather than building their own facilities.

“Demand for scalable outsourced IT infrastructure management solutions in Chicago mirrors the positive response we are seeing at all of our nationwide colocation facilities," said Evans Mullan, chief operating officer of Latisys Corp. "Despite the growth, Latisys remains laser-focused on providing each customer with the highest level of service.”

Latisys was founded in 2007 as Managed Data Holdings (MDH) with backing from Catalyst Investors and Great Hill Partners. It has moved quickly to build a footprint in the managed hosting sector, acquiring three providers and quickly expanding their data center capacity. Here’s a recap: