The UK Meteorological Office has been cited as one of the country's worst polluters, primarily due to its use of a powerful IBM supercomputer that helps predict climate change. 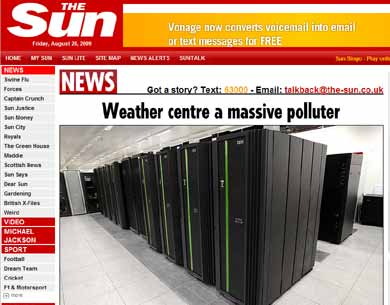 An example of the front-page news being generated by the energy use of a supercomputer at the UK Meteorological Office.

In one of the most vivid examples yet of the "headline risk" posed by IT energy usage, the UK Meteorological Office has been cited as one of the country's worst polluters - primarily because of its use of a powerful IBM supercomputer used to predict climate change.

The Met Office's headquarters building in Devon came in 103rd in a list of 28,259 public buildings responsible for the highest carbon footprint in the UK. While the agency was not near the top of the list, the alignment of a poor carbon profile with technology designed to track climate change has captured the imagination of the British press, prompting coverage by the BBC, The Guardian, Daily Mail and The Sun.

The Met Office supercomputer occupies the 73rd and 74th spots in the current Top 500 list of the world's most powerful supercomputers. But it also uses 1.2 megawatts of power, or "enough to power a small town" as noted by UK papers.

Met Office spokesman Barry Grommett has sought to articulate the merits of the supercomputer and the scientific work it enables. But for the moment, those explanations are not turning the tide of media coverage noting the seeming disconnect between the agency's goals and the energy overhead of its supercomputing operations.