Sonoma Mountain Village is dedicating 1 megawatt of solar power to a data center project at its Rohnert Park, Calif. campus, which is being designed as a sustainable mixed-use community. 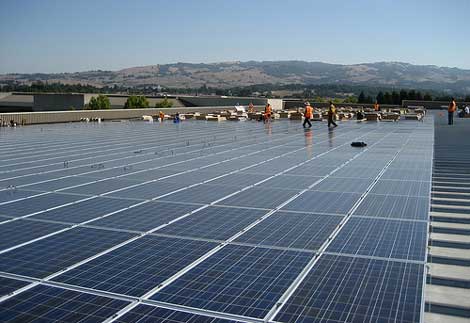 The developers of Sonoma Mountain Village will dedicate more than 1 megawatt of solar power to a data center project at its Rohnert Park, Calif. campus, a sustainable mixed-use community combining offices, retail and housing. The Sonoma Mountain Data Center becomes the latest in a series of data center projects to incorporate on-site solar generation into their energy supply.

The first phase of the data center will be powered by an existing 83,000 square foot solar array, which has been online since 2006 and currently powers office buildings housing AT&T and Comcast. The building can switch between energy from the solar array and grid power from an on-site PG&E substation with 9 megawatts of capacity.

Former HP Facility
The data center is a former HP/Agilent facility with two stories featuring about 60,000 square feet of space. The building is being offered as shell space, but developer Codding Enterprises says it can convert the space to a turn-key data center within nine months.

Codding says the Sonoma project will be a "less than zero carbon" facility, and projects that it will gain Platinum certification under the LEED (Leadership in Energy and Environmental Design), the rating system for energy efficient buildings overseen by the US Green Building Council. It is the second California data center to tout LEED platinum status, joining Advanced Data Centers in Sacramento.

Sonoma Mountain Village is a 200-acre community about 40 miles north of San Francisco designed to meet the United Nations' criteria for “One Planet Community” sustainable development. Codding says the project is currently the only qualifying site in North America and one of only 5 in the world.

The solar array generates 1.14 megawatts of power, and is expected to power the facility ofr at least 270 days a year. The Sonoma Mountain team says the solar installation, which is located next to the data center, will be able to support up to 250 racks in Data Center Suite 1.

More Solar Generation Planned
The developers say they have plenty of land to build additional solar arrays providing up to 5 megawatts of power as the data center is expanded using a modular design. Once the on-site solar generation capacity is maxed out, the developers will purchase renewable energy certificates to offset the use of grid power to expand.

Plans for the project call for a first phase of up to 6 megawatts supporting 1,000 to 1,500 racks. A second phase will be supported by an expansion of the on-site substation to 12 megawatts, and perhaps 18 megawatts.

Sonoma Mountain says the use of PG&E power in the evenings fits its sustainable mission because night-time power supply comes primarily from nuclear and hydro-powered generation.

Solar Data Center Projects
The project is the latest data center to incorporate solar power, which historically has been problematic in data centers because of the large amounts of energy required to power the servers and cooling equipment in modern mission-critical facilities. It requires a very large installation of photovoltaic (PV) solar panels to produce even a fraction of the energy required by most data centers.

Here's a look at other recent solar data center announcements:

The first provider to run a full-solar data center was AISO in Romoland, Calif., which parlayed its green energy profile into hosting web sites for Live Earth and other eco-focused events. 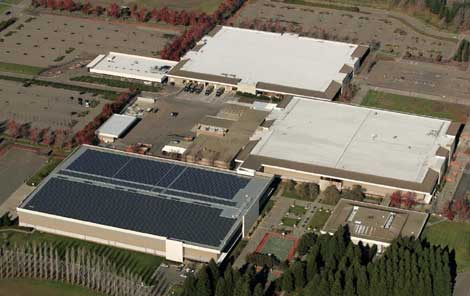 An aerial view of the Sonoma Mountain Village campus, showing the solar array next to the planned data center facility.