Emerson Looks to a Solar Future

Emerson Network Power's new data center in St. Louis features a 7,800-square-foot rooftop solar array, which can generate up to 100 kilowatts of supplemental power for the data center. 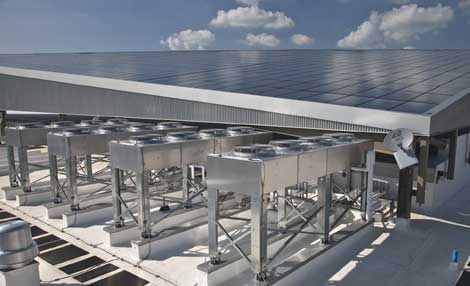 Perched atop Emerson's new data center is a 100-kilowatt solar panel array, which is visible across the company's corporate campus in St. Louis. That's one of the reasons for its high-profile location. "You can see this array from around the campus," said Keith Gislason, an IT strategic planner for Emerson who directed the project. "It's about the message, too."

Solar power has had difficulty gaining traction in the data center industry due to cost and capacity challenges. But Emerson took a forward-looking approach for its $50 million facility, and sought to craft a design that could demonstrate the potential for solar in the data center. Steve Hassell, Vice President and Chief Information Officer at Emerson, calls the St. Louis solar array "an aspirational project."

"The solar component was something we used almost as an experiment to learn the pros and cons," said Hassell. "This is the way the world is going, and it's important for us to have a real-world experience with this technology."

550 Solar Panels
Emerson's 7,800 square foot rooftop installation includes more than 550 solar panels, and is the largest solar array in the state of Missouri. Even so, at peak output it will supply about 16 percent of the data center's power requirements, and Emerson expects it will take 20 years of operation to fully recover its investment.

"When you're competing with coal-fired energy at 5 cents a kilowatt hour, it's difficult to make renewable energy pay off," Hassell said. "In our case, the combination of incentives and offsets make the array pay off, but over a long period of time. Emerson isn't normally in the business of making 20-year ROI investments."

Making Renewables Work
In coming years, the data center industry will face growing pressure to find workable ways to integrate renewable energy sources into projects. The demand is being driven by two trends: the growth of corporate social responsbility programs that focus on carbon neutrality, and the potential for federal legislation in the U.S. that will place caps on carbon emissions.

While data centers aren't specifically targeted by these initiatives, companies with carbon reduction pledges will find their data centers are among the largest energy users - meaning that sourcing data center power from renewable sources could be a major factor in meeting corporate carbon goals.

That's why companies like Emerson and i/o Data Centers - which plans a huge solar array at its Phoenix ONE facility - are investing in solar and looking for approaches that can work.

Large Arrays Required
"Data centers are a really good candidate for solar power, but the math doesn't add up right now," said Jack Pouchet, Director of Energy Initiatives at Emerson Network Power. "To power a data center completely, you need a collector space that's 8 to 10 times the size of your data center. It gets expensive, and it's one of the reasons data centers aren't jumping up and down to install solar."

But prices are moving in the right direction, Pouchet says. "There's a glut of PV panels, and the market continues to see declining prices on photovoltaics," he said.

As prices improve and companies feel more pressure for on-site renewable energy, Pouchet says the geography of data center solar usage may be steered by incentives that alter the economics.

"There are states that are ideal for solar," he said. "New Jersey, Hawaii, Oregon and California have very attractive utility and state rebates and incentives."

The Emerson project used SunTechsolar panels and a DC-to-AC photovoltaic inverter from Solectra Renewables. Emerson's solar array is engineered to survive wind storms of up to 150 miles per hour, as well as major earthquakes - a concern since St. Louis is not far from the New Madrid seismic zone. 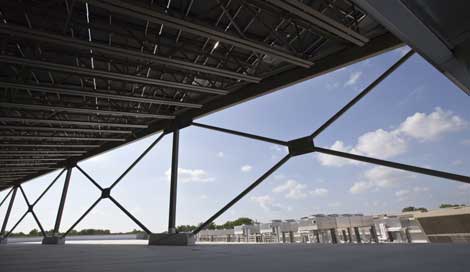 The view from under the solar array, which faces south and is angled to capture sunlight.