Google (GOOG) spent just $139 million on its data centers in the second quarter of 2009, as it further squeezed capital spending that was already at historic lows.

Google (GOOG) spent just $139 million on its data centers in the second quarter of 2009, as it further squeezed capital spending that was already at historic lows. On one level, the company's ability to reduce infrastructure spending reflects well on Google's capacity planning during its 2007 building boom, when it announced four new data centers. It's also part of a broader effort by Google to reduce spending uring the current economic slowdown. 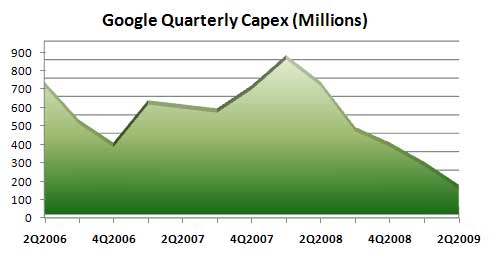 This was the fifth consecutive quarter in which Google's infrastructure spending has declined. The capex "breather" has been enabled by the company's building boom in 2007-08, during which it announced major data center construction projects in Lenoir, North Carolina; Goose Creek, South Carolina; Pryor, Oklahoma and Council Buiffs, Iowa.

That investment provided Google with plenty of data center capacity. After the economic meltdown gripped Wall Street last fall, Google throttled back spending even further, opting to delay construction of its data center in Pryor. Google says it remains committed to the Oklahoma site and expects to complete the facilty in the next 12 to 18 months.

Google continues to build in other markets. The company is expected to set an opening date for its facility in Council Bluffs, Iowa within the next several months. In March Google confirmed plans to build a major data center at a former paper mill in Finland, having paid $51 million in February to purchase the property.