Quality Technology (QTS) has quietly built a national chain of 11 data center facilities with more than 2.5 million square feet of space through acquisitions of facilities and customers from eDeltaCom, IBM, NTT America and Globix. 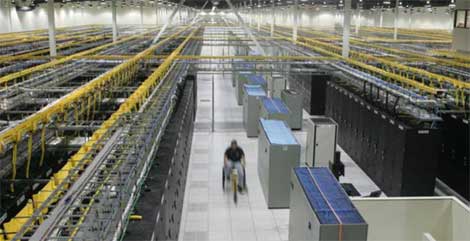 An overhead view of a Quality Technology Services data center in the Atlanta market.

Quality Technology Services may not be a household name. But if you're looking for data center space in Atlanta, they're an important name to know.

Quality Technology (QTS) has quietly built a network of 11 data center facilities spanning more than 2.5 million square feet of space. It has built its national footprint through acquisitions of facilities and customers from eDeltaCom, IBM, NTT America and Globix. The company offers both wholesale data center space and managed services.

More than 1.3 million square feet of that space is in the Atlanta market, where Quality Tech operates a 375,000 square foot data center in Suwanee, and a 1 million square foot property in downtown Atlanta. The downtown site, originally a MetroNexus project, features 200,000 square feet of finished raised-floor and acres of space ready for conversion to data center use.

"I think we have a pretty compelling story to tell," said Dan Kurtz, the Executive Vice President of Marketing for Quality Technology. "We've been in the market for a while, but didn't have space to sell. Now we do."

Quality was formed by Kurtz, CEO Chad Williams and President Mark Waddington. Kurtz and Waddington worked together at the Omaha IT firm 1st National Technology, while Williams was running the Quality Group, which specialized in real estate development.

Growth Through Acquisition
In 2005 the company purchased an eDeltaCom facility in Suwanee. A year later QTS bought a Jersey City data center from NTT America, and then acquired the managed hosting business of Globix in a deal that also included a Santa Clara, Calif. data center. Quality Tech migrated the Globix New York customers from a Manhattan site to its Jersey City data center.

Seeing additional growth potential in the Atlanta market, Quality Tech bought the MetroNexus site at 1033 Jefferson Street in 2006. In 2007 QTS acquired IBM's U.S. colocation business and migrated customers into Jersey City, and in 2008 the company opened a new 37,000 square foot Miami data center it acquired near the Dolphin Mall.

Space in Santa Clara
Most recently, QTS has upgraded the power and cooling capacity of its Santa Clara facility (PDF). As a result, Quality Tech has data center space available in Santa Clara at a time when several Silicon Valley projects have stalled due to the economy, leaving reports of a supply/demand imbalance.

The expansion in Santa Clara wasn't uneventful, including a power outage during a key transition (there have also been power issues in Suwanee). While the company doesn't discuss its customer list, Internap and Google are known to be among its tenants.

"Our customer base runs the gamut," said Kurtz. "We feel cloud and managed services are our strong suit, but we also have a lot of data center space. The sweet spot for us is the virtualized and cloud offerings, which are about solving business problems rather than power and space.

"We see a lot of activity in Atlanta because we're the dominant player in the Atlanta market," said Kurtz. "We also think there's great potential in Silicon Valley and Santa Clara that's currently untapped."