HP's new Extreme Scale-Out (ExSO) servers are designed for cloud computing and HPC environments. The skinless servers are optimized to be delivered by the rackload. (HPQ) 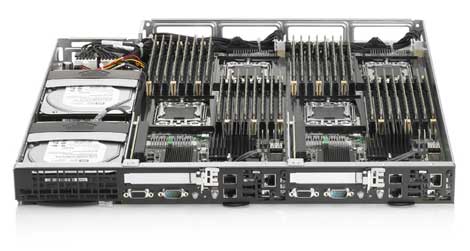 HP is stripping down to scale out. Today the company is launching a line of servers and services targeting the cloud computing market, which is accounting for a growing chunk of server sales. HP's Extreme Scale-Out (ExSO) portfolio is designed to appeal to cloud-builders' focus on energy efficiency and cost, and be delivered by the rackload.

HP's ambitions are built around the ProLiant SL server line, which features a "skinless"  architecture with a lightweight rail and tray design. The new servers are deployed in HP's new ProLiant z6000 chassis, a 2U frame housing shared power supply and fans. The common chassis allows customers to choose between three ProLiant SL configurations optimized for maximum memory, storage or processing power.

On each server, HP is mounting the disks on the side rather than the front, allowing better air flow through to the fans on the rear of the chassis. The i/o cabling is on the front of the server, allowing it to be serviced from the cold aisle.

"We've designed it for power efficiency and good airflow," said Ed Turkel, manager of business development for HP Scalable Computing & Infrastructure. "In this environment they typically don't need a lot of management features. We think of this as a lean and mean environment."

“Customers with scale out business models need solutions that make every dollar, watt and square foot in the data center count,” said Christine Reischl, senior vice president and general manager of Industry Standard Servers, HP. “These customers are pioneering ‘extreme’ businesses and their extraordinary requirements are pushing beyond traditional architectures."

HP is touting the ProLiant SL's ability to put data centers on a diet, both in terms of energy consumption and the actual weight of the racks. The SL line with Intel Xeon 5520 processors uses 28 percent less power than the HP ProLiant DL160 Server, and its skinless design makes it lighter. HP says the new SL2x170z is about half the weight of traditional rackmount servers, offering savings on shipping costs and allowing lower floor support requirements.

Here's a comparison of the models and features:

HP says the ExSO portfolio is ideal as the inner workings of the HP POD data center container.  "We're talking to some customers about deploying by the POD," said Turkel. "There's a lot of interest in that. But we expect most customers will want to deploy these servers in a traditional data center."

While much of the scale-out focus is on cloud computing, HP's new product line was welcomed by the company's partners targeting high-performance computing (HPC), including Microsoft. 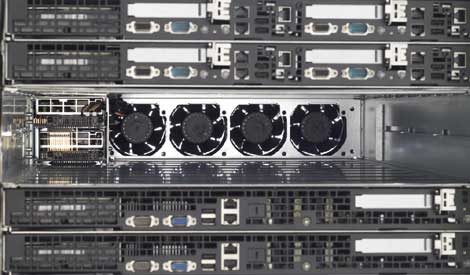 A view of the HP z6000 chassis, showing the fans lining the back of the enclosure, with an opening to hold two 1U servers.