Some Fiber is Darker Than Others 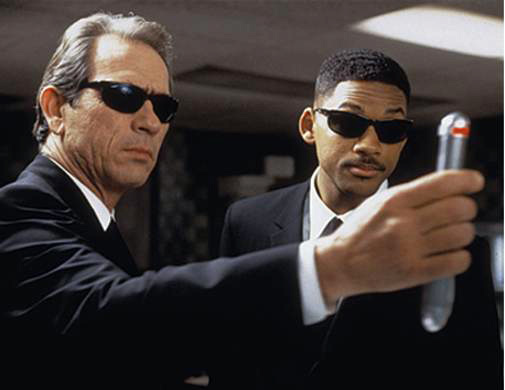 Do you remember when these guys showed up after that fiber cut? No, I guess not.

There's dark fiber, and then there's "black" fiber. And if your backhoe hits some of that top-secret fiber used by Federal security agencies, the Men in Black will arrive in a hurry to organize an unusually fast repair. At least that's the story told in The Washington Post, which recounts an incident in 2000 when a fiber cut in Tysons Corner brought a visit from men in suits driving black SUVs.

"The construction manager was shocked," developer Aaron Georgelas told the Post. "He had never seen a line get cut and people show up within seconds. Usually you've got to figure out whose line it is. To garner that kind of response that quickly was amazing."

The Post cites the incident in the context of the ongoing Dulles Corridor Metrorail Project, which will extend the Metro system to Dulles Airport and Ashburn. "After decades spent cutting through red tape to begin work on a Metrorail extension and the widening of the Capital Beltway, crews are now stirring up tons of dirt where the black lines are located," the paper writes.

The project will spend $150 million relocating more than 75 miles of conduit that run through Tysons Corner, handling lines for private utilities including Dominion Virginia Power, Cox Cable, Verizon, AT&T and many more. There have been some cuts, but apparently none mobilizing any fleets of black SUVs.

This story is being dicussed over at Slashdot.