Revenue in the worldwide server market declined 24.5 percent year over year to $9.9 billion in the first quarter of 2009, according to IDC's Quarterly Server Tracker. 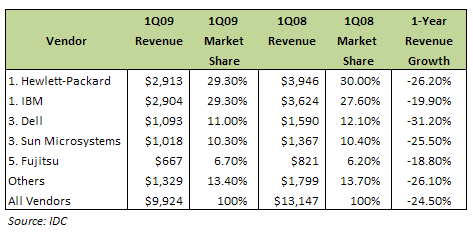 Revenue in the worldwide server market declined 24.5 percent year over year to $9.9 billion in the first quarter of 2009, according to IDC's Quarterly Server Tracker, which found the lowest quarterly server revenue in the survey's 12-year history.

"Market conditions worsened in all geographic regions during the first quarter as customers of all types pulled back on both new strategic IT projects and ongoing infrastructure refresh initiatives," said Matt Eastwood, group vice president of Enterprise Platforms at IDC. "Most enterprise organizations are deferring new IT procurements and instead focusing on extending server lifecycles and improving existing asset utilization."

The good news: this trend can't last forever. "IDC believes that while these strategies are effective in the near term, server demand will begin to improve in the second half of the year as customers begin to rebuild their IT capabilities in advance of a meaningful economic recovery in 2010," said Eastwood.

HP and IBM were deadlocked atop the worldwide server market, each with 29.3 percent share. Big Blue gained 1.7 points of share in the first quarter while HP lost 0.7 points of share year over year. IDC attributed IBM's gains to a solid performance in its System z and System p server businesses. Sun and Dell finished the quarter in a statistical tie for third, with Dell's server revenue declining 31.2 percentyear over year

"x86-based volume servers, historically an area of growth for the industry, posted another quarter of significant weakness during the first quarter of 2009," said Dan Harrington, research analyst in IDC's enterprise server group. "However, while it may be easier for IT departments to suspend purchases of commodity boxes as opposed to more mission critical RISC- or CISC-based servers, IDC expects x86 systems to rebound faster than the overall market in the coming quarters."