Rackspace Hosting (RAX) saw gains in its cloud computing business in the first quarter of 2009, adding more than 8,000 customers on its suite of cloud services. 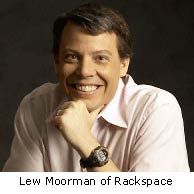 Rackspace Hosting (RAX) saw gains in its cloud computing business in the first quarter of 2009, adding more than 8,000 customers on its suite of cloud services, the company said Monday. The San Antonio company reported revenue of $10.9 million from its cloud unit, which now has 43,030 customers using its Cloud Sites, Cloud Files and Cloud Servers offerings.

Lew Moorman, the president of the Rackspace cloud computing operation, says the push into the cloud will enable Rackspace to expand its customer base. The economics of the cloud may differ from the company's traditional managed hosting business, but Moorman says the numbers add up.

"The model creates lower price points, but still allows us a profit margin," Moorman said. "It obviously exposes you to a different customer base, but we can lower our operating costs using automation. Part of the magic of the cloud is increased server utilization and increased asset life. We can get a lot more customers per server and do it without touching as many boxes."

While the Rackspace cloud may have lower price points than its managed hosting business, the San Antonio provider won't be engaging in cloud pricing wars. "We've never been in the business of being the lowest cost provider, and this probably will be true in the cloud as well," said Moorman. "This is a young business for us. We're in investment mode right now. But I do think this is a scale economics business, where it will be difficult for smaller players to compete. This requires a very serious infrastructure."

Moorman has been instrumental in the development of the cloud services platform built by Mosso, which started life as a grid hosting provider that was owned by Rackspace but operated as an independent brand.

"We've been very pleased with the success at Mosso, but we are transitioning," Moorman said. "We'll continue to have a cloud hosting unit which will be called the Rackspace Cloud that will replace the Mosso imprint. Over time we'll be building integration with traditional hosting plans at Rackspace. We're doing it in steps.

"We believe every customer will use some cloud and some infrastructure," he added. "As the cloud becomes more mature, this will become a priority. We really believe that the need for infrastructure is not going away tomorrow."