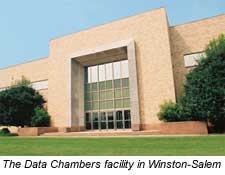 North Carolina service provider DataChambers today announced plans to build a second data center on its Winston-Salem campus, while expanding its existing data center for the second time in less than a year. DataChambers will invest $9 million in the expansion, which will more than double the company’s data center capacity. The company currently has more than 110 clients from 28 states, who use its 44,000 square foot facility to house both backup systems and primary data networks.

"We’re responding to a strong growth in our business, fueled by companies trying to do more with limited budgets," said Nicholas Kottyan, CEO of DataChambers. "Typically our clients find we can deliver a level of service they simply are unable to replicate affordably on their own."

DataChambers will create a new 20,000 square foot data center from a series of vacant rooms in the former Western Electric manufacturing plant where the company makes its home. The space is located 18 feet underground in a blast-resistant structure. Interior demolition is now underway.

DataChambers also is expanding its existing data center to maximum capacity by reconfiguring walls and adding approximately 1,500 square feet of space. This is the second expansion of the facility in less than a year to accommodate new clients.